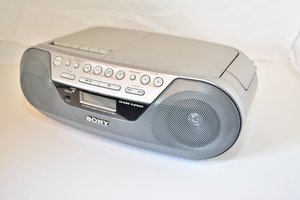 Sony CFD-S05 CD Radio Cassette Player was released in 2010, and has the CD-R/RW playback function.

How to get the unit to read CDs

My CD player won't read CDs will not even go to the first track. It just makes a whirring sound.

pdkenyon, possibly a dirty laser lens. Try any of the commercially available CD/DVD lens cleaners and see if that works. If not, you are having to think about replacing th Laser unit, or the complete drive.

If possible, try another player/computer. My copy of the Talking Heads Fear of Music was not recognized by my desktop computer DVD drive but was read fine in an older computer.