I stupidly purchased a iMac (21.5 inch late 2013) with only 8GB of RAM. I understand its virtually impossible to add ram internally, but does anybody know of a product I can use to increase my RAM without a tear down? Like installing more ram thru a usb or lighting port? Thank you!

Just use an uninstaller to clean junk files and make a space in your mac RAM.

I did this upgrade this last weekend for a customer. True it is a PITA. It was the first time into one of these glue job machines for me. The whole thing took me about 3 hours but I was being very careful. Only Apple makes the mSATA blade SSD for the machine and they wanted $950 for the 256 and $1350 for the 512K.

The RAM upgrade ran just under $200. My question is WHY? Why do you think you need that much RAM and if you can use it, why don't you have a MacPro? iMac Intel 21.5" EMC 2638 RAM Replacement

First off thank you very much for taking the time to answer my question. I believe I need more ram, because I have the app "memory clean" installed on my Mac. Whenever I use iPhoto, or mint, and try to say surf while the photos are uploading I'm constantly running right around 8gb. At the time I only purchased 8gb, because I told the sales rep I'm more of a beginner and would probably just be doing some normal stuff plus light photo and video editing. He thought 8gb was plenty, but based on what this app is telling me it's not. I really don't want to take it into a certified apple repair store just for cost reasons, and I was hoping, obviously having no real understanding of how computers work, that there might be a product I could just plug into one of my usb or lighting ports. Based on your answer it sounds like I asked a silly question, yet you still responded and did so very professionally. Thank you!

I have not used that APP. See if there is another one that does the same and compare the results. There are no silly questions until you ask the same one a second time. There are very few Apps that even have the ability to use the RAM you have installed. I really didn't answer it, I just implied. No, there is no way to use an external source for RAM. I did install a Hybrid Seagate SSHD into the machine I was working on to speed it up. That installation is involved because of the screen removal but after that is very easy. Nothing like the RAM upgrade. Others here may have experience with the new thunderbolt technology and may have suggestions on how to utilize it.

I added a new 2TB SSD last month. I also added a 500GB blade SSD from a MacBook Pro that I had spare from my late 2013 MacBook Pro as my iMac version has a blade SSD slot on the logic board.

To get to the RAM and the Blade drive I literally had to take the whole Mac apart and remove the logic board as both the RAM slots and the Blade type drive are not accessible without doing this. I used ifixit’s kit (not a plug) and it was a long job but can be done as long as you are careful when removing the display assembly and also when putting it back on.

If you only want to upgrade the normal SATA HDD to a SSD it doesn’t take as long as you only have to take off the Display assembly.

I have recently added a photo of the logic board I took out from my iMac below when I was taking it apart for anyone wanting to see what it looks like after removing. You can see the slots for the RAM and the heatsink for both the processor and GPU as well as the PCIE slot at the top of the picture. This was after I had just taken it out so you can see the dust at the top on the USB connections. 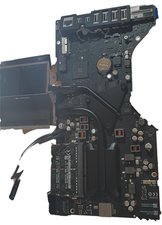 How do I check if my late 2013 have the nvme slot before I open it?

@dominik.gawrilow As far as I’m aware the PCIe slot only came on a iMac preinstalled with either a blade SSD or a Fusion Drive from factory but someone else may know different.

Attempted to replace HDD with SSD but failed and broke the Glass panel bought new Display and want to upgrade my RAM also same model since am living in Iran its kinda expensive to buy from UAE Apple retail store. A friend said laptop RAM work on your iMac my question is:

Can I buy SO-DIMM DDR3 1600 2x8 GB kit laptop RAM and replace it on my self ? I mean the exact model spec as Apple explained works on my iMac?

Yes, iMacs use the same standard SO-DIMM RAM which is used in many laptops, just be sure to buy the same kind specified in the Apple menu "About This Mac".

The 21.5” models comes without the access panel to get to the ram, only the 27” models have the ram slots accessible externally in the rear.

Your system max memory is 16GB so you can't get to 32GB. You can switch out your SATA 3.5" HDD to a 2.5" SSD with little effort. Replacing the i5 CPU to i7 for most won't offer enough improvement. All you're getting is a few more threads so multi-threaded apps can leverage them but the run time of the app won't offer than much speed improvement unless your doing large image or video rendering jobs. If that's what you are doing then if your system has the option for the blade SSD I would put my money their first getting a 512GB or 1TB blade SSD.