My iMac will not turn on?

Yesterday my power went out and when it came on my iMac would not turn on. I thought there may have been a power surge but my NAS and external drives powered up. I looked thru the suggestions in the answer section of ifixit. I held down the power button for about a minute. I also unplugged everything over night and tried holding down the power button in the morning and nothing. I'm wondering if the power supply needs to be replaced? If so I'm not sure what power supply to get. The last 4 digits of the serial number is GVUX.

I appreciate any help given. Thanks for your time.

The iMac (17-inch Late 2006) has three built-in diagnostic LEDs and a front power-on/sleep LED on the main logic board that can help you to troubleshoot the computer.

2. Locate the SO-DIMM slot and LVDS video connector. The three diagnostic LEDs 1, 2, and 3 are located to the left of the battery and under the SATA cable. Note that the LEDs are marked 1, 2, 3 from left to right, as show below. An additional front bezel LED is located in an opening at the center of the right speaker, as shown below. 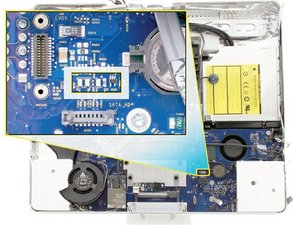 • Indicates that the computer and the LCD display are communicating. This LED will be ON when the computer is turned on and video signal is being generated.

The iMac (17-inch Late 2006) will not turn on. The display remains black and there are no sounds from the fans or drives.

1. Verify the power outlet is good. Plug a different device into the socket to ensure there is power, or plug the iMac into another outlet. Does the iMac power on now?

3. Check the connection of the power cord on both ends. Verify that the power cord is securely plugged into both the AC outlet and back of the computer. Does the iMac power on now?

Yes: You may have a loose fit to your power cord. Replace the AC power cord and test.

4. Follow instructions in the General Information chapter to reset the SMC. Does the iMac power on now?

5. Remove and reinstall the SO-DIMM memory modules, located in the bottom of the

computer. Does the iMac power on now?

6. Remove the RAM access door, front bezel, and lower EMI shield to gain access to the three diagnostic LEDs. See “Diagnostic LEDs” in the General Information chapter for complete instructions on this procedure.

LED #1 is On: This indicates that the power supply is getting good power from the AC outlet.

Go on to the next step.

LED #1 is Off: This indicates that either the power inlet assembly or the power supply should be replaced.

8 Press the power button. Check to see if LED # 2 comes On, comes on momentarily, or stays Off.

LED # 2 is On: The Power Supply is functioning. Go on to the next step.

LED # 2 comes on momentarily or stays Off: Replace the Power Supply.

9. At this point in the Power On process, you should hear a boot chime and see the front LED on the computer light up. When the main logic board and LCD panel communicate to deliver video, the front LED should go off, and LED # 3 should be on. Does the Front LED go off?

Yes: The LCD and main logic board have communicated. If there is no picture on the display, follow “No Video” troubleshooting.

No: Your logic board is not communicating with LCD panel. Go on to the next step.

LED # 3 is On: The logic board is communicating with LCD panel. Follow “No Video”

LED # 3 is Off: The logic board is not communicating with LCD panel. Reseat the LVDS cable and test again. If the issue persists, replace the main logic board.

1. From the Apple menu, choose Shut Down (or if the computer is not responding, hold the power button until it turns off).

2. Unplug all cables from the computer, including the power cord.

4. Plug the power cord back in, making sure the power button is not being pressed at the same time.

5. Reconnect your keyboard and mouse to the computer.

6. Press the power button on the back to start up your computer.

Thanks for giving me this very useful information. It looks like my power supply needs to be replaced. I really appreciate your help on this.

How do I replace the power supply

That mean I need to replace the power supply and Logic Board? :(

I had a similar issue: I changed the internal 3V button battery and this seems to have cleared the problem. My imac does not have any leds for diagnosis.

That mean I need to replace the power supply and Logic Board? :( 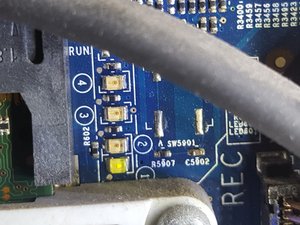