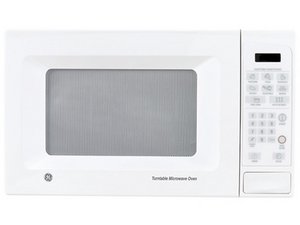 Door will not open after pushing door button

Microwave door will not open after pushing door button

The standard answer on repairing microwaves is "just say no". These are one of the very few items that almost all of us will not attempt a repair on. They can kill you. They are cheap, easy to replace. Or you can take it to a pro and hope he doesn't get killed.

I stay away from door repairs especially as a misalignment can allow microwaves past the door and blind you. +

Cheap and easy to replace? What if the microwave is a part of a $3K built-in double oven? I am sorry, but you don't know what you're talking about.

Well avxn you feel free to go right ahead. I choose not to risk my life. Besides this answer was not in response to a $3K built -in oven. Was it? I also have have 7237 accepted answers on this, Yes, I do know what I'm talking about.

Go right ahead? Already did. Replaced the safety microswitches on the latch board. A very, very common repair, performed by homeowners many thousands of times, certainly by many more people than who chose to agree with your approach, and that's even before you factor in other common problems, from a burnt-out light bulb to a magnetron, and everything in between. Now look, the microwave in a built-in is of exactly the same construction as a stand-alone, in terms of repairing it, but is is not "cheap and easy to replace" _as a unit_. Furthermore, it is just plain false to state that a DIY repair on _any_ microwave somehow entails an inherent risk of life even if proper requisite precautions are taken. If that's what you imply, would you please care to prove that statement?

axnj1 I recent saw your post and agree 100%. I think misaligning the door is both obvious and highly unlikely if you have the skills to take it apart in the first place.

Bingo! Thank you Rick. Using your advice, I found a replacement button (jbtn-b091mfr0a) and spring (505526) online and was able to replace them on my sharp r-530es micro.

Unplugged and let sit an hour to discharge (assumed). Then removed the case (lucked out I had a set of torx bits to get the tamper proof screws out). Then from the inside I removed a single screw on the bottom that retains the control panel. Later when replacing that screw, made sure it was making contact with the metal ring as its hooked to an input on control board. the control panel then can be slid upward a quarter inch to free it, then pulled away. Left all the board connections attached. Pushed the button out from the back and found the tab was broken off and still in the box. The problem came and went depending on where that tab was at.

90 minutes, under $20. I could have afforded a new microwave. But it's ridiculous to toss it out. By the way the design of the button changed to eliminate the tab that broke off.

David - Where is the spring supposed to go? I see diagrams of the button and the door spring but the manufacturer spring does not seem to have enough torque to push the lever to open the microwave door. Any help would be appreciated. Thanks

The back side of the button has 3 plastic posts about 3/4" wide. The spring fits over the middle post. I think the replacement spring was slightly stronger than the original. But both we sufficient to push the button back out when pressed. Link to the button part here (if post allows) http://www.thriftyapplianceparts.com/jbt...

The advice in these comments worked perfectly. I took the microwave out and removed the screws (including the safety screws (with a flathead) and sure enough it was the button. A small ‘ear’ had broken off and was jamming the full Travel of the button. I put the button back on and it worked perfectly - did not buy the replacement. Great advice guys!

This is exactly what has happened with my Electrolux oven. The ears holding the button has broken. I wonder from where I will find this part. Any suggestion? My oven is a Electrolux EM22EC80SS

Our 2 year old Whirlpool stainless steel microwave finally quit opening with the push button. After pushing the button and opposite end at the same time to open it for a few months my husband had the bright idea to simply open the door and push down on the top edge of the door closest to the button. Miraculously it began opening with the button!!! Haven't had an issue with it for several weeks and will be trying this should it happen again. Worth a try ;)

You are a genius!!! Ours is a wall microwave so in the small crack above the casing where the button is located I inserted an ice cream opener and SLIGHTLY pressed down. Works like a charm - and I have talked to repairment for days!!

THIS WORKED. I pressed down very slightly, not expecting any result from such a simple remedy, but IT WORKED. Now the door opens. Thank you

This worked for me, too! Thank you so much for posting. Now, I'm wondering if, over time, if the door eventually stops opening again? In any case, I'm very happy that this solved my issue for now..

My Frigidaire door was not working/opening for me. I had to pull it open from the bottom to get my coffee out every morning. But every time my daughter uses it it works for her! HaHa! It's been about 2-3 weeks now like this. I don't want to pay a repair guy and don't want it to end up in the dump either.

According to GE when I called there are no replacement parts available for the WES1452SP1SS models. Your only choice is to buy a new microwave. Mine failed after 13 months use - great design huh?

Did you get it at Walmart? Often times, a W in front of the model means that the manufacturer has dumbed down the design to meet Walmart's price point....ie: cheap.

availability of replacement parts depends on what part it is, and popularity of the model. A common failure, burnt spade lugs is trivial. Bad switches can be substituted if you know how to cross them. Diodes replacements are available, as are capacitors and maybe even a magnetron, though the latter may not be economical to replace.

I recommend going through the manual (if you still have the manual) and trying to find information about your model. My model is DMT2420. If you can get the microwave open I would advise to inspect the door latch.

I dunno how to fix it

I will be 90 in March. A widow. So, when my microwave open button did not open the door, I was puzzled.

Came to this site for help. Sounds like some catch is broken. How did that happen? I am extremely careful

of my appliances, etc., - I wonder if I should just replace it? KitchenAid #104something. Actually, I JUST NOW

pulled down on the door next to that latch, and PRESTO IT OPENED …..I had just read someone suggested doing

This one the buttons have a micro-switch behind the button.

Remove from cupboard. Screws on front stop it being pulled out.

Remove two screws at either end of front lower panel. Keep the rubber seal and note how it fits.

Push panel up slightly and ease out.

You need to remove the PCB from the plastic case. So remove the two screws and push the three tabs. This exposes the PCB. Push tabs keeping PCB in starting at opposite ends working towards middle.

Once the PCB is out check each micro-switch for movement. Resolder any that move. If none move replace as they are cheap and easy to get hold of.

Fit in reverse. BUT check the earthing between case and front panel. Don't forget the rubber seal.

Don't run the microwave without the casing on and be very careful where you poke the screwdriver as some of the parts will hold at least 4k volts for quite sometime before they naturally discharge.

If in doubt get someone else to do the fix for you.