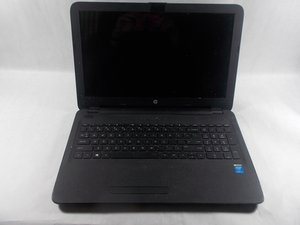 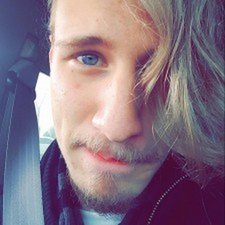 How do I resolve the boot to black screen problem?

We’ve been trying to fix this HP Notebook 15-ac141dx (Touch) device that was received by a client in our area. We have confirmed that all onboard hardware works, and have tried booting with minimal hardware to determine the fail points.

Currently, the device is booting to a black screen. We are able to access the BIOS, manage TPM settings, and select Boot options, but as soon as we select a boot device, it does not work properly. We have tried booting to both an Installation of Windows, a Live Disk for Windows Install, and a Linux Install disk and none of them have yielded a different result.

We additionally tried booting the device in legacy mode to determine if the device has been affected this way. That did not yield any further successful result. We have also reseated all hardware components, and tried booting with the RAM in each slot, with multiple combinations yielding no result.

The whitepage by HP for this device can be found here:

It is important to note that we have noticed multiple physical ‘ailments’ to the device. There is frame damage on the inside, indicating that the device has been dropped significantly, as well as spillage that required cleanup of the hard drive PCB, and the inside of the laptop casing.

We believe that the problem may lie with the spillage, and/or with the shock damage to the mainboard, but we are looking for a second opinion from the iFixit community. Typically we do not want to resort to heavy parts replacement, especially given the resale condition and value of the device, however depending on the client’s desire, it is their decision whether the device should be repaired.

I can't see that you mentioned it so apologies if I missed it but did you try:

Yep! We tried this option through the available HDMI port. I'd have preferred a VGA option to test, but that was not available. As far as I can tell, additionally the display is in working condition, so it baffles me why neither option works.

Did you try booting with a USB or CD (or tried both) when you tried the other options to boot the laptop and it didn't like it?

You said that "We have confirmed that all onboard hardware works," presumably this means that you did tests to prove that the PCI devices and video memory checks out OK.

Wondering if the HP USB diagnostics tool would work?

Just trying to further eliminate (as you most probably already done ;-)

We've attempted booting via USB (UEFI), CD (UEFI), HDD (UEFI), as well as all options with Legacy mode - All yield the same result, and boot to a black screen. The screen is illuminated by the back light, and is just displaying 'black' pixels. We've considered attempting a PXE boot, but setting up the environment for that would be outside of the reasonable budget for repairs. If you have an easy suggestion for testing this, I'd be game to try it.

It is strange t to be able to see information on the screen when in BIOS but not from a boot with an OS from different sources. This may be a problem with the GPU not able to switch video modes, the GPU is part of the system board. The liquid spill probably corroded the circuits for the video.

After restarting the computer you can press F10 on the blank screen to enter bios mode you may require to reboot Hp till you enter BIOS . But if there is no display try to connect your device to the external monitor and after connecting check if you are getting display on the external computer.

Unfortunately, all of that has already been tried.

try soft reset turn off laptop remove all the connected cables to it and remove the battery, now remove a coin shape cell connected to the below panel wait for 10 to 15 seconds and press power button for 30 seconds, now reattach all the things and restart while doing this you are suggested to download updated bios for your model and by saving in pen drive try to attempt BIOS update

Hello have you tried removing hdd and running OS on another machine then after successfully installed ,take it back and see how it behavea