Why is it happening? MBP struggle to power up, no cold joints or crack

Hi guys i need a bit of advice about what's going on here.

i have a macbook pro 17 mid 2009 which struggle to power up, let me explain better :

when the first time i press the button , usually it briefly lights up the sleep led and shuts, then you press it again it reaches the apple logo and shuts again.

if you repeat pressing the button , and after few shuts down , the mbp manage to reach the desktop working fine for days.

But on this machine i've checked power rails and buck regulator and caps (like c7771) which usually are problematic.

Everything shows up at the correct voltage.

Cleaned the motherboard twice, did check for any cold joints.

Motherboard on its own (no external components) stays on without shutting down.

I tried to trace the components that maybe are drawing too much current which could lead to the problem.

Battery has 28 cycles, it doesn't seems to have a faulty cell.

hey mayer , thanks for the answer!

Laptop has been in storage for a while , then reutilised .

battery is strangely at 90% of its original capacity after 28 cycles, I'm trying to recalibrate it at the moment. 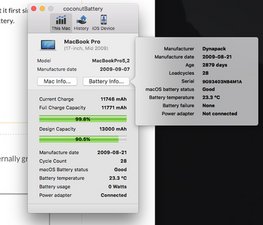 Tough one. Obviously you've recently replaced the battery so let's take an in depth look at it first since this appears to be a power issue. Please download, run and post your results with Coconut Battery.

One of the pictures show it as connected, the other as not connected. It is not charging. It seems to be the original battery.

Maybe that battery could not keep up the power drawing of the logic board .

But still unsure.. as now i have another logic board fitted on this chassis and another battery, all good here.

Now weird thing is that logic board on another chassis without screen has no problem to turn on and be used , which potentially could confirm my first statement. Another idea would have been a grounding problem, i think will remain a mystery anyway.