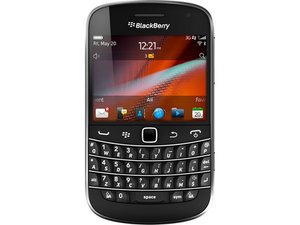 The BlackBerry Bold 9900 is a smartphone with full QWERTY keyboard and touchscreen.

How can I access critical data on internal memory when handset dead?

My Blackberry Bold 9900 has died. It had a working battery with charge but went dead. I changed battery multiple times and even tried a brand new OEM battery which works ok in another handset but still nothing other than sometimes a red flashing light which then either stops and the handset returns to being totally dead or I get a picture of a battery with a red x in the middle.

I have critical data stored on it which I need to get off....yes I had backed it up religiously twice weekly with the Desktop Manager due to the how important the data is but my pc (along with the dedicated backup drive) died at the weekend so my Blackberry is the only place where I have the outlook data (calendar/task/email) info which is so critical.

Do you know of a way to extract data from a handset that won't power up? Vodafone's 'red box' can only transfer data off the device if its powered up but if I could get it to power up, I could use the Desktop Manager to get the information myself. I've tried leaving it for periods to charge and then removing the battery and re-inserting, turning on with the charger plugged into the mains and pressing the on button whilst connecting the charger and then putting the battery in but neither have worked thus far. I've installed the Desktop Manager on my son's pc but again, because the handset won't power up it cant connect.

Lellyland there is really no other way. You can only access the memory when the phone is powered up.

Many thanks chap, its as I thought but was hoping for a miracle cure/suggestion to get it powered that I'd not yet found or perhaps even a method so drastic as to move the memory chip from the pcb to another operable handsets pcb?!....any further suggestions greatly received!