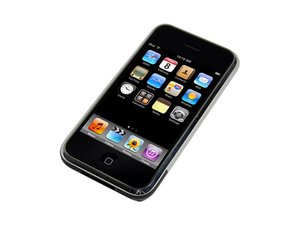 The first model of iPhone, Model A1203 with 4, 8, or 16 GB capacity and an aluminum back. Repair requires a significant amount of prying, and may require some soldering.

Why does my Iphone think it has an accessory?

Two weeks ago, I was in Mexico, and had my iPhone in an iSymphony charger/speaker combination. Since, It thinks it is still attached to an accessory, asking me the question "do you want to turn on Airplane mode?. it tends to drain the battery, and I cannot shut it off!

I have reset, and restored the device both as an old an new iPhone, it still won't go away.

I once had a customer who had the same issue, was in an isymphony setup. It caused a high energy draw into the dock connector and shorted the 28th pin. You need to replace your dock connector on your phone. Ifixit should have the parts...

Erm, no they don't

They don't have it. Can you tell me what pin the 28th is, maybe with some magnification and a dental pick, I can clear the short?

carefully clean the dock connector of your iPhone with a dry SOFT toothbrush and a little compressed air. You may have some debris shorting out some of the pins.

If this doesn't help, its possible the device you connected it to has caused internal damage (some devices "Made for iPod" are not "Made for iPhone" and can damage newer devices).

This reply may be redundant, but yes everyone is right on the money with water damage and dock connector issues causing this problem. Definitely check your dock connector for pocket lint compacted down in it. I have seen iPhones with so much fuzz jammed into the dock port that the power charger won't even lock into place properly! If you get a little moisture on this "lint jam" it can short your connector.

I suggest buying the entire 2G top glass/midframe assembly (provided of course you don't have water damage evident on the logic board) I've used this unit from Hong Kong for $98.00US (free shipping) a few times(Cosmax I believe is the company name and expect 14 days for delivery). It makes easy work of just about any 2G repair since all you're going to use from the broken phone is the logic board, camera, aluminum back housing with head phone/button flex assembly and the black plastic outer antenna cover.

Thanks, OPK. I fixit does not have the docking connector, any idea where I can get it? I don't believe Apple sells those kind of parts!

the dock connector assembly is readily available for around the US$30.00. This is one place u can get some parts (I assume it is a 3g you are talking about but they have parts for all models) http://is.gd/4XEOn Good Luck :)

OPK, You ROCK! Haven't fixed the dock connector yet, but my new symptom is the camera view on the screen is in vibrant reds, with a little blue in the black areas. Does this suggest the corrosion is progressing?

rhutchis I suggest you crack it open and take a look, the corrosion should be relatively obvious. I am not 100% on your camera issue, it could be related but I am not sure.