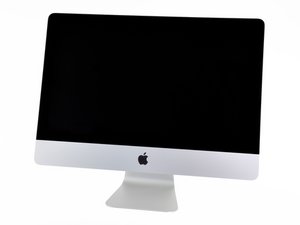 I'm trying to upgrade the RAM on my work computer (12,1 education iMac) but I'm having trouble identifying which manual to use. The ERM (2496) doesn't match any on your site.

In software, all of these models have the same model identifier of iMac12,1, so it only can be used to precisely identify a model when combined with the processor type and speed.

Internally, the education-only "Late 2011" iMac model is significantly less capable -- with a slower processor with half the number of cores, less memory, less video memory and a smaller hard drive -- compared to the regular "Mid-2011" iMac models.

All of these models support the same 1333 MHz PC3-10600 DDR3 SDRAM SO-DIMMs and have four RAM slots, but the "Mid-2011" models officially support 16 GB of RAM and third-parties have determined that these models actually are capable of supporting 32 GB of RAM. The education-only "Late 2011" model, on the other hand, officially supports only 8 GB of RAM, but actually is capable of supporting 16 GB of RAM.

Other upgrade capabilities may also vary between the lines. As first discovered by site sponsor OWC, the "Mid-2011" models support the 6 Gb/s Serial ATA 3.0 standard for the hard drive/SSD after installing the iMac EFI Update 1.6. The storage drive in the education-only model is believed to also have the same capability, but it is possible that the speed is limited in EFI.

Likewise, all of these models have the processor mounted on an LGA 1155 (H2) processor socket and it is theoretically possible to upgrade the processor to some extent, although doing so is not supported by Apple.

Details: By default, 2 GB of RAM is installed as one 2 GB SO-DIMM module.