Not starting, no noises, fan or LEDs

To start, I enjoy using Macs but know very little about the hardware within it. After looking at some tutorials and reading some typical solutions I have made it to a dead end. I've taken almost the entire thing apart, replugged things back and put it all back together. When plugged in, it just won't start, as simple as that. The cord is good I think, the outlet is good - past that I don't know what could be malfunctioning inside but I see no lights on anything inside when its plugged in. It won't even try to start. Suggestions?

Joshua, start with what Apple suggest:"

How to Reset the System Management Controller (SMC)

The System Management Controller (SMC) is a chip on the logic board that controls all power functions for your computer. If your computer is experiencing any power issue, resetting the SMC may resolve it. The SMC controls several functions, including:

Telling the computer when to turn on, turn off, sleep, wake, idle, and so forth.•

Force Shut Down (press the power button for 10 seconds).3.

Resetting the SMC can resolve some computer issues such as not starting up, not displaying video, sleep issues, fan noise issues, and so forth. If your computer still exhibits these types of issues after you’ve restarted the computer, try resetting the SMC.

To reset the SMC on an iMac

From the Apple menu, choose Shut Down (or if the computer is not responding, hold the 1. power button for approximately ten seconds until it powers off).

Unplug all cables from the computer, including the power cord.2.

Wait at least 15 seconds. The SMC reset occurs automatically once the iMac has been 3. unplugged from the AC power source for several seconds.

Plug the power cord back in, making sure the power button is not being pressed at the time. 4.

Reconnect your keyboard and mouse to the computer.5.

Press the power button on the back to start up your computer.6.

Note: The iMac does not have a button on the main logic board for resetting the SMC, which eliminates the need to remove the computer’s cover to reset it (as required for some other models).

The iMac has four built-in diagnostic LEDs on the main logic board that can help you to troubleshoot the computer. The four LEDs are located to the right of the memory slot, under the hard drive data cable. 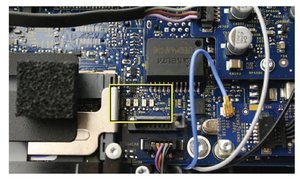 The computer will not turn on. The display remains black and there are no sounds from the fans or drives.

1. Verify the power outlet is good. Plug a different device into the socket to ensure there is power, or plug the iMac into another outlet. Does the iMac power on now?

3. Check the connection of the power cord on both ends. Verify that the power cord is securely plugged into both the AC outlet and back of the computer. Does the iMac power on now?

Yes: You may have a loose fit to your power cord. Replace the AC power cord and test.

4. Follow instructions in the General Information chapter to reset the SMC. Does the iMac power on now?

5. Remove and reinstall the SO-DIMM memory modules, located in the bottom of the computer. Does the iMac power on now?

6. Remove the memory access door and front bezel to gain access to the four diagnostic LEDs. See “Diagnostic LEDs” in the General Information chapter for complete instructions on this procedure.

LED #1 is On: This indicates that the power supply is getting good power from the AC outlet. Go on to the next step.

LED #1 is Off: This indicates that the computer is not detecting AC power. If both the AC outlet and the power cord are good, replace the AC/DC power supply. If the issue persists, replace the AC line filter.

8. Press the power button. Check to see if LED # 2 comes On, comes on momentarily, or stays Off.

LED # 2 is On: The Power Supply is functioning. Go on to the next step.

LED # 2 comes on momentarily or stays Off: Replace the Power Supply.

Yes: The power systems of the computer are working correctly. See “Troubleshooting No Video” in this chapter.

If LED#1 does not come on at all, and if you checked your outlet as well as the power cord, I would check the PSU. Use this guide iMac Intel 20" EMC 2210 Power Supply Output Voltage Test for that. ;-)

Perfect, I installed a new power supply, got 3 LED lights and hear a fan. NOW, the screen stays black and it beeps once every few seconds at me. I read that may be a RAM issue. Thoughts before I go buy a new RAM card?