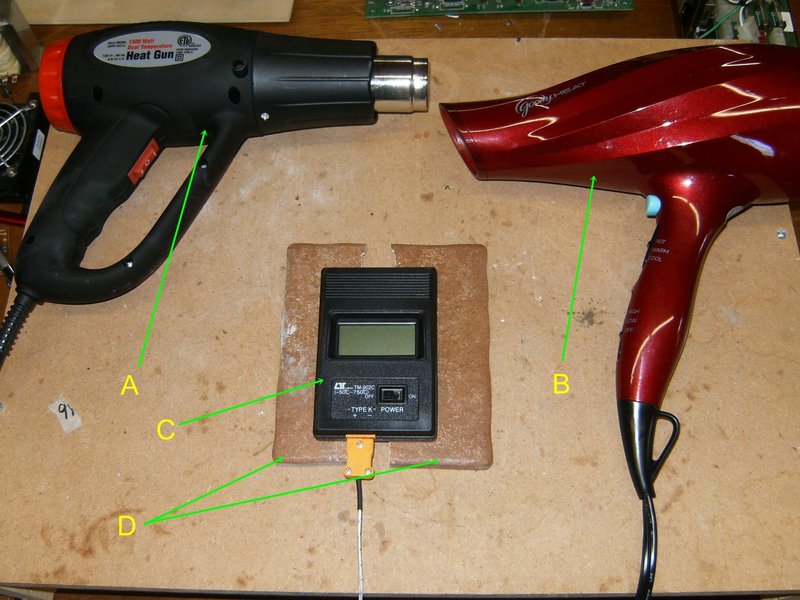 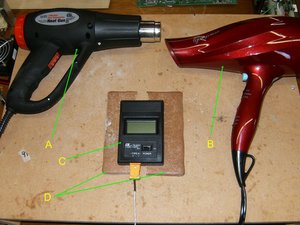 Hair dryer for logic board reflow

Hopefully this will make a definite case '''against''' using a hair dryer for any reflow attempt. It will '''not''' reach the temperature required to reflow any logic board. Of course this is just informational for those that wondered about this in the first place. Thanks for a great forum.

Okay, so I had some time while I was waiting for parts to complete a few more projects. I did my daily browsing through "Answers" and thought it is time to clear up the debate about using a hair dryer for reflow purposes. There are plenty of question and answers about using a hairdryer to reflow either a X-Box or an iPhoneor any other device. To determine what temperatures are produced by either instrument, I assembled a few tools of my own. For this test I used my Dual Temperature 1500Watt heat gun, my families Goodies 1875Watt 2 speed hair dryer, my Lutron TM902C thermometer (range -50deg C to 750deg C), and a few left over ceramic tiles as insulators. 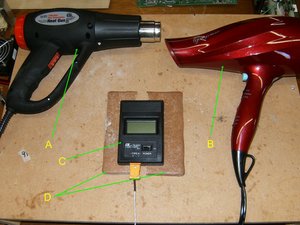 I went ahead and sandwiched the end of the Type K thermocoupler between the ceramic tiles. This way I tried to eliminate variances caused by ambient temperatures as much as possible. It also protects the probe end from to much heat exposure. 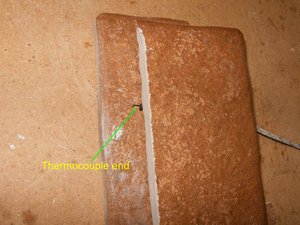 Ambient temperature in my shop during this test was 23deg C (73.4deg F). Pretty mild day for South Texas:-) 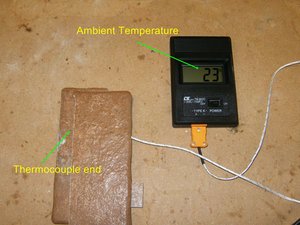 First heat source I tested is the Goodys 1875watt 3speed hair dryer. It is set to Hot on high speed. 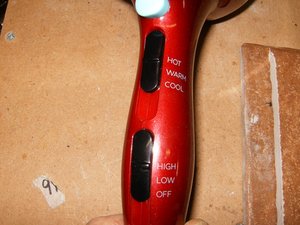 At a distance between the heat source and the thermocoupler of 3/4" (19mm) the maximum temperature it reached was 63deg C (+/- 2deg C by moving the hair dryer in a back-and-forth motion across the thermal probe) (145.4deg F) 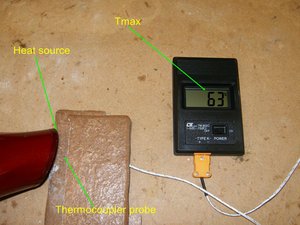 Next up is the Dual Temperature 1500Watt heat gun. I used the same setup with the same distance between the heat source and the probe. With a distance of 3/4" (19mm) and the heat gun set to the first speed settings, the maximum temperature reached was 100deg C.(212deg F) 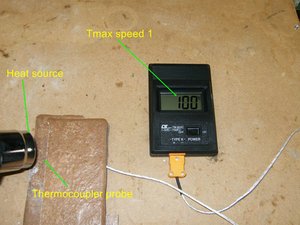 With the heat gun speed at stage 2 the maximum temperature measured was 240deg C.(464deg F) The picture is somewhat deceiving since the angle of the heat gun is increased, so it appears as if it was directly over the thermocoupler. Proper distances have been maintained. 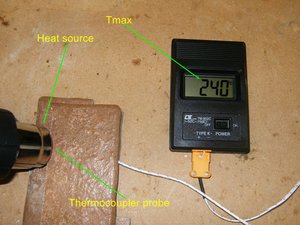 To determine if a hair dryer was sufficient to reflow a board, I picked the solder available in my shop. It is the Sn-Ag-Cu (Tin-Silver-Copper) solder, that is also used by two thirds of Japanese manufacturers for reflow, and has a melting range of 217–220deg C or 422-428deg F . Lead containing solder, like the 63/37 Sn/Pb used principally in electrical/electronic work, has the lowest melting point of all the tin/lead alloys at 183deg C or 361.4deg F. I do recognize that the solidus quantifies the temperature at which melting of a substance begins, but not necessarily the substance is melted completely, is lower than the melting point, but this temperature is usually just a few degrees lower than the melting point

References are here and here