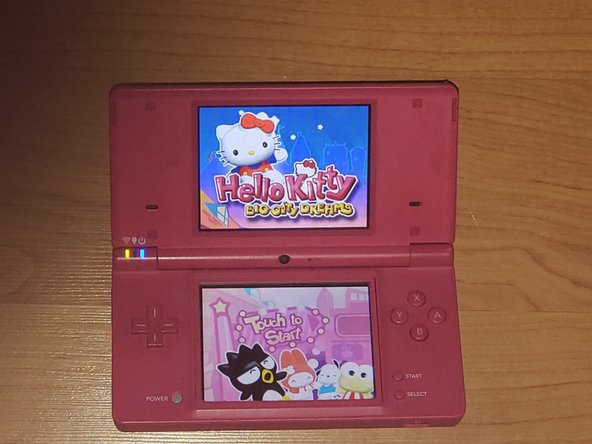 This beautiful pink DSi was immersed in water by one of my children. I dried it completely and placed it in a drawer. Over time I tried to charge it and turn it on a couple of times unsuccessfully. It sat in a drawer for 3 years.

I remembered the DSi this year and decided to attempt the fix. This time it charged but it would not stay on, there was hope.

I watched the iFixIt tutorial and learned that my DSi needed a new lower screen. I took my DSi apart following iFixIt's instructions and installed the screen. It took me about 2 hours because I triple checked that all the cables were fully plugged in.

I put it back together without installing the screws, held my breath, and turned it on. It quickly turned on good as new!!! I closed my "new" DSi with its screws and immediately started playing with it. Thank you iFixIt!!!!!!

Some of the cables are very small, please be careful plugging them in and make sure they are fully inserted and locked in place. I closed my DSi fully without installing the screws to test it in order to avoid electrical shocks.

That’s super awesome. I remember breaking my DS in a similar way 14 years. Wish there was a repair guide back then, and maybe I’d still be able to play Advance Wars 2. =(