I recently repaired the bloated battery in my late 2013 MBP. Initially, the procedure was a success! I plugged in the machine to charge to 100% and kept charging for at least 2 hours, then drained to 0% (the full battery lasted nearly 4 hours) then charged to 100% again (as per the instructions from ifixit).

The following day, when I returned home I found the machine was very slow. Checking Activity Monitor, several processes were running at over 100% CPU usage. Menu meters are showing every other core maxed out at all times. Also, the battery is no longer recognized. I have downloaded Coconutbattery which doesn't see the battery either...

I have reset SMC and PRAM as per instructions I found on this forum, neither of which have solved my problem. Any thoughts or advice would be greatly appreciated!

EDIT: As per @danj requests, here are a few pictures: 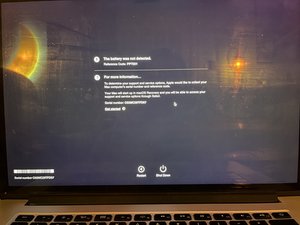 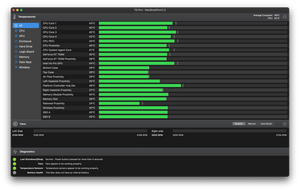 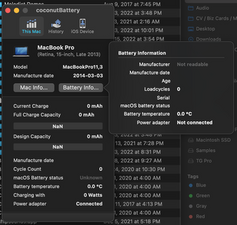 I also want to clarify that the first issue was the CPU spike. This happened after 24 hrs after the successful battery swap, and after the computer had gone back to "normal". I then reset PRAM and following that the computer no longer recognizes the battery. Thanks again =)

Restart your system and press the D key to enter the onboard diagnostics, depending on your macOS release it might not work (Apple broke it).

If that fails you'll need to get TG Pro full version to gain the diagnostic it offers (still not as good as Apple's - Thanks Apple!)

The other test is to get deeper info on the battery and the charging logic install this gem of an app! CoconutBattery take a snapshot of the apps main window and post it here for us to see Adding images to an existing question

Lets see where this gets you.

Well you'll need to get a fresh battery this one is bad ;-{

For reference here's my battery as you can see it has all of the data present!

Again, thanks for your help. I have to ask: It's a brand new battery... Is this normal? Before I go dropping another $100 on a battery is there any way to check if anything else is malfunctioning here?

@haigashod - Talk to the seller to see what they can offer you as you should have a warranty for it.