I have a damaged monitor.

Here is my problem. My 2009 MacBook Pro was smashed by a enraged girlfriend. The only physical damage that was done to it was that the monitor came out the hinges. Screen is not cracked at all and doesn't appear to be.

When I turn it on you can hear it come on and see the white light on the front come on and the keyboard light up.but the video screen doesn't come on at all or the apple logo on the backside.

I connected it to an external monitor and it happens to work perfectly. I opened it the other day and no wires were torn either. My question is what can i do to get it fixed and where and a estimate would be nice because if it cost too much I'm just gonna get rid of it.

I will upload pictures later if needed. Thanks in advance.

BTW I Just turned it on now and I noticed is said airport is not installed. when in fact i use to always use it wireless.

Update 2 - I uploaded the pictures so u can see the damage.i took the lcd off the computer so now i have two halves. as u can see there wwere no broken wires to the mother board and i cant tell internally if anything is broken behind the screen because i dont own the suction cups or the heat gun to remove it and see. but im open to any suggestions 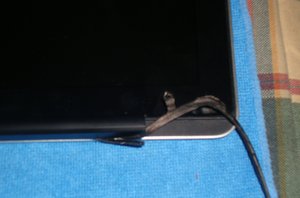 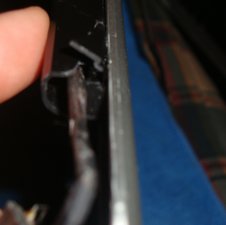 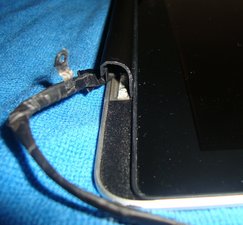 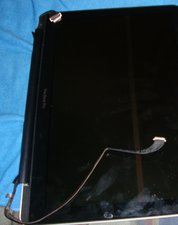 Thanks to everybody that contributed. i finally took the glass bezel off,the lcd itself and one ribbon cable was disconected and the ribbon cable on the right side was broken completely. can anybody point me in the right direction of buying a whole lcd with the bezel and aluminum part with hinges and cable. thanks

I fixed it finally today . i just bought a whole lcd assembly from ebay for 385 . followed the tutorial from here to the t . now its working perfectly

If one of these answers fixed your problem please hit the "accept" in list that has "History Edit Flag Accept Comment" located to the upper right of your question so we can remove it form the unanswered list. Thanks so much.

I think you have no choice, you'll have to open the display to check the cables connections or the other solution would be to buy a complete working display assy if you have an insurance that covers the MBP damages.

lemerise is right as usual. This should be covered under insurance, call your agent. I'm sure the damage was an accident, she didn't really mean to damage your property.

It's looking good for you, there doesn't appear to be any damage to the cables but I dont see the antennas in any of the pics so i cant really say. The other cables look fine, the only thing I see that ur gonna have to replace so far is the Hinge Cover which u can buy for like $10 bucks on ebay.

Of course you can always sue your gf!

She probably works undercover for an PC retailer.

However, I go with the idea that the connection cables are not connected anymore. Depending on how fit you are with computers, I would try to open the MacBook and check if there is anything not in it's place.

He said that he already opened the machine.

Yes but the display is not opened yet.

ok i uploaded the pictures

Thanks to everybody that contributed. i finally took the glass bezel off,the lcd itself and one ribbon cable was disconected and the ribbon cable on the right side was broken completely. can anybody point me in the right direction of buying a whole lcd with the bezel and aluminum part with hinges and cable. thanks

I would not buy parts until the MBP and the display assy are taken apart. Maybe the cables are just disconnected from their sockets and that's why you don't have video and airport signals. That's a good thing your logic board is OK. For sure my first move would be to replace the girlfriend LOL !!!

Lmao, that's what i did Lemerise.

vote up for the girlfriend recommendation.

ditto on the up vote and the girlfriend

thanks or your suggestion.

It's funny cause i had the same enraged girlfriend accident, except she did way more damage. U might need the Airport antenna which is routed through the display and might have broke. U might also need the inverter and data cable that go from the display and are connected to the logic board. If the dispaly isnt damaged ur looking at the two antennas that go from the display to the airport card and the data cable that connects to the logic board. I did this repair myself and it wasnt that easy but can be accomplished with a little patience. Just get the parts u need here or ebay and use the guides here or on youtube for the repair. Can u send a picture so i can see the extent of the damage?

My girlfriend actually stomped my MacBook. I had to replace the topcase, optical drive and the whole display assembly and i did it with under $200. I have a new MacBook and all parts were replaced with the exact parts and even an upgrade to the optical drive, UJ868A . So dont think its not possible or too expensive, and mind you, i had never opened a computer before and I did it. So can you.

I uploaded pictures if this helps

Why would your girlfriend stomp on your computer?

Let's just say that my Mac was aiding in my activities.