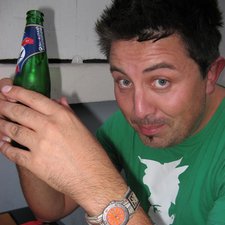 MacBook Pro no startup sound, and not able to start

My MBP A1260 just died, nothing special lead up to this. It have been trustfully been working for 2.5 years.

No startup sound or picture, though the superdrive does it regular startup thing, the fans start (normal speed) and the on/off light comes on when I power it on. This is what I have tried:

I even coneccted an older battery to check if the poweradaptor is able to charge it, and that looks OK.

Currently running out of ideas here, anyone? I'm I looking on a dead main board here?

+ Thanks for starting a new question.

Hi mayer, thanks for answering :)

Yes, the magsafe lights up as normal, and it charges the battery and my spare one as normal (checked the power bars). Holding C during startup give me nothing.

There's nothing to give me a clue. Outside of switching the logic board to another machine, I really have no idea of where to go.

I'll currently running on my backup computer but I'll have another go with it as soon as I find the time or I'll drop it off at my local Apple shop, even just to get the diagnostic from them.

I can't tell if you've done exactly this: remove the battery, disconnect the hard drive, connect the MagSafe, insert your system installation disk and try to start holding down the "C" key. Did you get anything? You've done a very good job of testing. Press the button on the battery to see if it is charged. Are you getting a light on the MagSafe?

You did not specify if you tried to disconnect the top case and start the machine directly from the logic board. The top case could be the culprit in your case.

You could be right but Is the a way to do this? The on/off button and logic prints are located on the top case.

Replaced the Logic Board and the left i/o board - now what?

@lemerise: I have not found time to test the top case. I tried to take a short cut since I personally did not have time at the moment and dropped it off at a Apple retailer. I hoped they should tell me that is was the nvidia chip that died and replaced the main board. After a few weeks they sent me an email claiming it was the main board but not the nvidia that had died. They told me that they had tried booting up the computer with "minimum cables connected" If that also means that they disconnected the top case do I not know.

I'm not sure if I trust them, and will do my own tests, removing the mb from the case and do what you normally do to test it.

The answer is none of these, really.

The problem is, the GPU gets so hot, it physically unsolders itself from the board. Luckily, Apple extended the warranty so you are eligible for a new one :)

@Score: Thanx for then link :) The nvidia bug, is what I personally think causes the problem, then computer died after been trancoding my DVD collection for a few days, and was nice and hot when I put it to sleep. When I woke it up, there was no external video and then it just died. Proving that this is the issue, have proved to be hard. At the workshop, they had a USB quicktest dongle, but I mean if the main board do not bootstrap, how can this tell then anything? If I look at the GPU pins through a microscope prehaps I'm able to tell if this is the case? I seem to remember there where some discussions about the method they used to solider the GPU to the board if I'm not mistaking.

I have a MacBook 2010 core 2 duo which work till Saturday night. I got to work on Monday and the system won't come on fan not rolling and also not charging