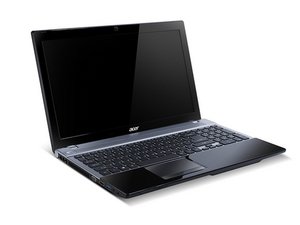 I bought a new fan for my Laptop, as the old one basically didn't function anymore. My laptop has been laying around for exactly 1 year so when I bought it, I didn't think about the old metal part it was attached to.

The actual fan was inside a metal part, which is connected to the headpipes and screws on top of the CPU to keep the heatpipes there. However, it is also the hull for the fan itself.

The new fan arrived in a plastic case, which has the exact dimensions as the old bit for the fan but does not include the rest of the old metal thing. Sadly the screws on the new plastic casing are too small for me to open and I'm not even sure if I'll be able to insert the new fan into the old casing, as I can't see the mount points it uses/needs.

I could break the old metal part away from the heatpipes, but that would create a problem with the attachment of the heatpipes to the CPU (not the GPU though).

I am still trying to figure out how to open the new plastic casing, but I'm not sure if I'll be able to and if the fan can fit inside the old metal frame (but it should, as I bought it looking at the serial number).

How bad would it be if I tried to:

Here pics of the comparison between the fan cases and the old fan casing on the motherboard. 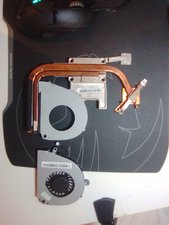 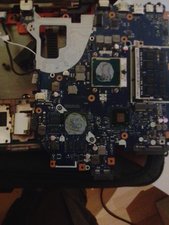 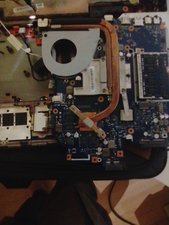 Is there any other step that would be recommendable/not to be taken?

You have some problems:

-The fan will not cool all the things that it may cool.

-The pc will overheat constantly (more than what you think)

The thing that you should have done is buy the exact part for your pc. You probably bought the incorrect piece (some extra fan of the same pc or a desktop pc fan).

If you will change the piece (you should buy the whole piece new) don't forget to put some thermal paste over the processor and the GPU (you need to clean the old paste and replace it with newer one).

And I don't recommend you to repair things without the necessary tools because you can mess things (I did that a lot of times).

I bought a part with the EXACT model number. It's just that I very recently noticed that the screwdriver I was using was about 0.2mm too large (guessing the difference based on the difference between screw sizes 1mm and 1.2mm). I have no idea why the sent it in a separate casing. -.-

The only thing that wouldn't be cooled would be, what I guess to be, the sound chip. CPU and GPU do still have the connectors, although the CPU would be a little bit harder to attach, but not impossible.

Also, my PC was fried a year back so i had to open it up to get the hard drive with my data out.

Thanks a lot for your answer.

I would mount the new fan in the original metal part. If you can't get the screws to line up you could use really good glue to hold it. The Dollar Tree has really good contact cement if you live near one. As long as the fan can spin freely and it's near the original location you should be fine.