Why does my screen have horizontal lines over everything that is blue? 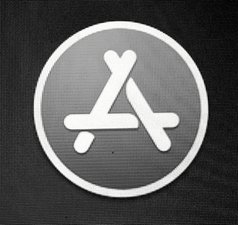 I took that picture with my phone, I had to adjust the looks of the image for the lines to show up. If you look at the image from a distance you will see faint, horizontal lines across the App Store icon.

But this is not the only place these lines occur. They occur over everything that is blue; buttons, other icons, etc. From afar, the lines aren't really noticeable. But up close they really get annoying.

I took a screenshot on my Mac of the icons and zoomed in on the image to see if the lines would enlarge. But they did not, which means these lines aren't part of the design of the buttons/icons.

Furthermore, my sister has a similar MacBook Pro (just with the intel iris pro, not the 750m), and the lines did not show up.

More importantly, I am running High Sierra, whereas she is running Sierra.

So, could this be a software or a hardware issue?

I'm suspecting your display cable is degrading or the connections on the logic board has corrosion.

To make sure you'll need to hook up an external monitor comparing your system to your sisters. They should look the same. Let us know what you find.

You'll need to follow this IFIXIT guide: MacBook Pro 15" Retina Display Late 2013 Display Assembly Replacement as you'll need to remove the display to gain access to the connection just under the black clutch cover. Apple doesn't offer this cable as a spare but you can find it, otherwise you'll need to swap out the display assembly.

The external does not have the horizontal lines when connected to an external monitor.

I have exactly the same issue with my 2015 15" MacBook Pro :( did the replacement of the cable fix it or did u end up needing to replace the entire display?

I have the same model of MacBook Pro, and when I first got it off eBay, I noticed this. When I upgraded to Catalina, It was really noticeable and it felt like OS X Tiger almost, where there were pinstripes on everything on purpose. When I upgraded to Catalina, it wasn’t remotely noticeable anymore. If I put the system in light mode with blue as the control color, and scale the display back down to default (I run the scaling it as high as it goes), I can still notice it a little tiny bit on certain system controls, but I don’t notice it remotely as easily (I have to actually look for it) and I don’t see it on other things like the blue Post button here on the website. I dunno what to think. The fact that it lessened in severity makes me wonder if it wasn’t just a design choice that went unspoken. For the record I did replace the SSD with an NVMe drive before installing, but I don’t think I unknowingly reseated the display connection or anything.