Hey - I'd love to know if the ribbon cable for my iFixit battery is the norm or if mine isn't up to the usual standards?

The cable on the original apple part is exactly along the side of the battery body,

it has a little fold at the side and it allows the connector at the end to perfectly align up with the socket on the logic board.

The part from iFixIt sticks up from the body of the battery,

It doesn't have the little fold on the ribbon cable

And when I connect it to the logic board the cable sticks up several MM into the air which I guess would probably put too much pressure on the back of the display if closed.

Did I just get a badly made part that shouldn't have passed quality control?

I've included photos of the ifixit battery from the front and the side where you can see the cable sticking up into the air. 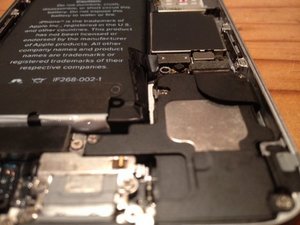 It is quite common for them to come this way. Some more than others. Sometimes I will clip the connector in and then lay the battery down just so I can get a good angle on it or unclip it, and try to push the ribbon down next to the battery and connect it in to move it into the correct shape. As long as you don’t pinch it too tight then there should be no worries but I am constantly having to reshape these to fit into place.

Thanks. I expected higher quality control from ifixit because of the premium they charge over the cheaper batteries.

I got the flex cable bent into the same shape as from the official battery by being very gentle and careful using some tools before putting it back into the device.

Still, it's concerning when I see a perfect flex running exactly up the side of the official battery nice and tight, and a wobbly one from iFixIt curling around the front.

After all the work I now have a working phone and better battery life.