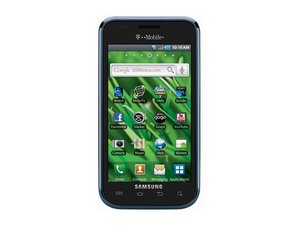 The Samsung Galaxy S Vibrant is an Android mobile device carried by the T-Mobile service provider.

Hello, I had a Samsung Galaxy S Vibrant T959 by T-Mobile with a broken screen (the screen was unresponsive and completely black) and after the screen replacement it shows the boot up animation but when the animation ends the screen stops responding and it doesn't switch into the lock screen.

Until installing a new screen though the broken screen was unresponsive ( I mean it was completely black) but the phone was actually working in the background, such that when I plugged the USB the USB connection notification was able to be heard, and when I pressed the ON/OFF button the lights on the bottom sensors' lights got switched off. However, after the screen replacement when I reinstall the battery and turn on the phone it shows the boot up animation but after the boot up animation it gets stuck in black screen, with the bottom sensors' lights lit up and they do not even respond to the ON/OFF Button. How can this problem be fixed?