PSP working with power supply but functioning batteries not detected

I am experiencing a weird issue on my PSP 2006 and I wonder if any one got an answer for that. I am trying my luck as I could not find such existing thread online (yet)! Basically, the PSP do not recognize batteries, which are proven to work on another PSPs, though PSP works when connected to wall socket.

- PSP does not even start when on battery.

- When plugged in with battery, if I disconnect the power supply cable, PSP will turn off immediately

- When plugged in with battery, the battery indicator at the top right of the screen shows 3 bars and disappears alternatingly every 5 seconds or so.

- When plugged in with battery, when going to the battery info menu it does not disclose the details (dashes) and power source shows as "Exernal"

- I have contacted a PSP repair shop but they mentioned it could be a mobo issue which they are not exactly handling...

Where could the issue come from?

Is that a common issue?

Is there an answer why did this thing happened in the first place? What is the cause of it? It’s perfectly fine then suddenly became like this.

If any, how can we avoid this from happening?

Anyone have an idea?

I have same Problem in psp3000. And I test the voltage between t pin and positive. It’s not stable. I re-soldering the power management ic on mb solved the problem temporarily. Some hours later, the battery will be not detected.

@Xin CHEN Hi Xin Chen, I also tested the voltage with the multimeter, it is pretty unstable on my side too. Are you referring to the power IC or the power switch board? Have you managed to solve the problem already? Thank you.

I think the CMOS Battery is Depleted /Dead after many years of use from the date of manufacture up to present.

i’ve seen some videos with this psp problem, they Heat the Power IC with hot air ,remove the CMOS battery, charge it manually then solder it back to the PSP Motherboard and it worked. Or you can get these batteries from a dead psp motherboard .But I never tried this.

Or you can Try This … Works for me All the time

1>>Power your PSP with the original charger(or a powerbank in my case) and play continuously for 30-45mins without the battery.

2>>After playing for 30-45mins , Power off & Disconnect the charger or power bank

3>> Insert any working battery . AS FAST AS YOU CAN, you dont want to lose that residual charge on the motherboard .

In My Case i use a MODED Battery With An Original PCB Taken from the Original PSP Battery. Check the update portion below.

My psp3001 works fine now. I use a moded battery. Don't throw your old original battery, the board(PCB) inside is still usable.

DISCLAIMER ALERT : DO THIS AT YOUR OWN RISK , I WILL NOT BE RESPONSIBLE FOR ANYTHING. THANK YOU .

1. I have a chinese battery from amazon (INSTEN) that won't work on my psp so i decided to salvage the battery cell but not the board.

Take extra care not to damage the parts inside while opening the original and the chinese battery.

You don't want to damage the board from the original battery and the cell from the chinese battery.

2. Now that you have the original board and a cell ,its time to assemble your moded battery. Connect the + and -. Google it if you don't know the polarities and how to connect it. In my case I didn't solder it or use a thin wire.

The chinese battery and the original board itself has a thin foil connection That connects them both to the + & - terminals so try to figure out how to reconstruct it. Putting some wires and some solder will have an added thickness effect on how will you fit the board & cell inside the casing.

I use the INSTEN Battery Casing.

The chinese INSTEN battery has way bigger cell compare to the original one, i also did not include the plastic internal panel that holds/ insulate the board from the original battery cell to reduce thickness.

On the new moded battery, i use a scotch tape instead to insulate the parts from sticking together inside and the same tape for resealing the battery casing. Just in case of trouble shooting, its easier to remove the tape if you want to open it again.Reducing the thickness is the key to get the perfect fit once you install it to the psp's battery bay/compartment with the battery back cover.

3. Before using the new moded battery, repeat the steps above (My Original Comment).

-after playing, install the moded battery as fast as you can and turn on the psp.

-Do this at least twice.

4. If the moded battery works,charge it until full charge. Play and discharge the battery until it turns off by itself. Do this twice just to re-calibrate the battery. It's just a way to reset the battery board to send the info to the psp to display the true battery life percentage.

-Full charge the battery, check the voltage with a multimeter, should show 4.20 to 4.22 volts (maybe more or less) at full charge.

A full charge PSP Battery is 4.2XX volts, It will not exceed that Maxpoint. PSP will Auto Shutdown the charging Process when the battery is full or has reached the Maxpoint. The Orange light indicator will shut off. Mine shuts off at 4.18Volts.

-If the battery information say’s “EXTERNAL”.

SOLUTION :Repeat step 3 but go at least 1Hour of play w/o the battery.Repeat Repeat Repeat.

The CHARGE light may flash for the following reasons:

The environmental temperature is too cold to charge the battery pack.

The battery pack has not been used for a long time.

There is a poor connection between the battery and charger.

There is a problem with the battery pack.

The CHARGE lamp may flash fast (multiple times a second) or slow (around 1.5 second intervals), depending on the cause.

Slow flashing occurs if the battery has not been charged for a long time or if the environmental temperature is not suitable for charging the battery. The slow flash should stop after a short while or after the temperature returns to a suitable range between 50°F and 86°F (10°C and 30°C).

Fast flashing indicates a poor connection between the battery and charger or a problem with the battery pack. Remove the battery from the charger and then use a dry cloth or cotton swap to clean the metal contact terminals on the battery. Afterwards, try charging the battery again. If the flashing continues, then the battery may need to be replaced.

I hope it helps, GOODLUCK !

Just follow the four steps and your PSP will rise again!

This worked for me as well. Is this a permanent fix though?

@jonatan97 No, it's just temporary, but it helps until you'll be able to replace the CMOS battery.

I think it's not a CMOS battery but a capacitor, I have the same issue, a dead PSP just arrived today, I will replace the capacitor tomorrow and tell you the results.

If someone could please update me with this issue that would be very much appreciated. Thanks!

Sounds like this may be a battery issue. A battery replacement is inexpensive and a good place to start.

Next step is indeed a motherboard replacement.

Thanks a lot for your answer. In this case it may be a MB failure because I have tested with quite a few batteries already without success. I may also check the charging fuse as it sits between the battery and the MB...

Batteries are working on other PSPs but not on mine. It is only powered by AC.

Olivier have you found a fix?

I have the same exact problem with the PSP -3006. I bought already 2 batteries, which are perfectly working fine on other PSPs. Have you already found the cause of this problem? So I can tell exactly my repair man what's going on.

In a couple miminutes a couple battery charge wonderfully but not as detectable as posible. . 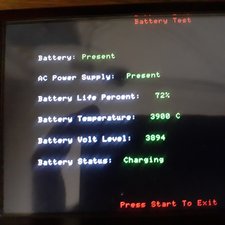 Thank you Amir for introducing ptest, I have just tried on my batteries/PSPs as well...

Test has been performed on the following devices using the SAME battery: 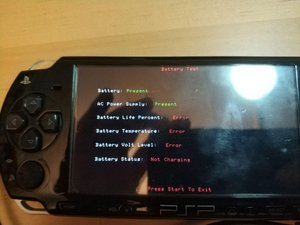 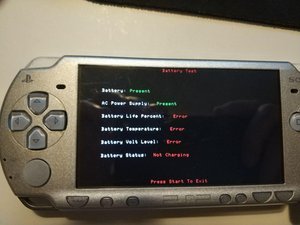 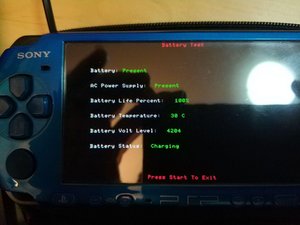 As you can see from above screenshots, in the case of the 2x PSP 2000’s, there is a battery detected and even charging, but communication between battery and device fails to establish. In this case, battery won’t be able to power the PSP. That may confirm a mobo/IC issue… perhaps the “charging IC” as shown on the pic below: 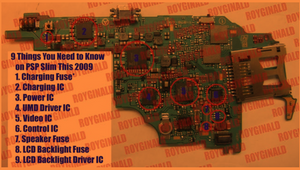 Please let me know your thoughts if any, or if you’ve come across similar experience, comments would be highly appreciated!! :)

Well bro, the only way to fix it permanently seems to be this method of a indonesian channel, here it's the link of the video, hope to this will help us, I hope some like u replicate this tutorial in english

Hi Guys, have you get the chance to fix it ? I have exactly the same problem. I also noticed that if I start the PSP with charger and then I unplug it, the PSP works until I move it a bit. The Battery icon disappear and the PSP goes off (like a fake contact).

Seems like its a CMOS battery problem, I have the same problem in 2 psp 3000, if u find the way to fix it write me mercenariocirujano23@gmail.com

I think he fix this exactly problem

Omg, @groliv . I have bought a battery from a Chinese supplier called Osten that worked for 15 minutes and after that my PSP started having the same issues as yours. Even the Ptest result was the same.

Did you manage to solve it?

@eduloko, same here, I bought 2 batteries for 2 psp 3000 from ostend aliexpress, first minutes works good, but this issue appears in both of them psp, I read all this stuff and not find anyway to fix this, I'm about to buy a psp go haha

It's seems like this the way to fix it, https://youtu.be/lR5zQae3C_w

In my case I had used faulty 2 in one USB/power supply cable from geek.com. I noticed the psp charging light turned off 2s after I plugged it and that was it... As if it was not enough I hadn't noticed the issue at first and connected the cable to charge another PSP which as a result got the same problem... We have to be careful about cheap items from the internet!

Also, it seem that it could be due to using USB to DC cables on the PSP. I have used them over time because they are more convenient to use than the old bulky 5V PSP charger, and allow using phone chargers instead. The reality is, voltage might be slightly different.

For a fact, I have tested the PSP charger, that delivers 5.3V. A phone charger hardly delivers 5V (or less) most of the time. Though I wouldn't think that would spoil a PSP overnight I believe that it might be related to some extent. Could anyone confirm this?

Edit: I haven't observed such issue with PSP-1000 so far which may come with higher tolerance or more sturdy IC/components that 2000/3000 versions...

Totally the same issue for my psp 3000 black. I suspect it is motherboard problem? Or battery problem? Definitely not the adapter problem. Now I have to play the psp with adapter, if accidentally touch the charging port then the psp turn off. No battery information, power source is external, no battery icon appear too. How to fix this? I hope not to give up for my favourite psp