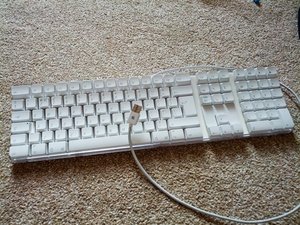 Why is there no fn key?

This keyboard, the one with the keys enclosed at sides and bottom with clear plastic, has no fn key. What can I do?

Can you clarify what you mean here. Did you loose the key cap or is the key just not working.

What he's saying is there is no Fn key on that keyboard at all - it isn't there, it doesn't exist.

The only option you have, assuming you're using OS X, is go to System Preferences, Keyboard and check the box that says "Use F1, F2, etc. as standard function keys". Note that this means F1, F2 etc won't work with any apps that use them for input.

FYI you can't remap the Fn key in the OS because holding the Fn key and pressing another key sends a distinct signal that's equivalent to pressing a different key - the same as pressing J vs K. So it's like having a bunch of extra keys that you don't actually have access to. The Fn key itself doesn't send a signal to the OS as normal keys do.