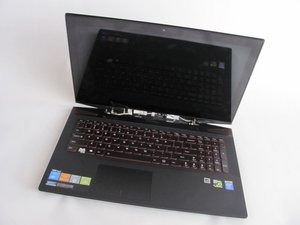 How to replace the keyboard on the Lenovo Y50-70 Touch?

I want to take out the keyboard to clean it completely because i accidentally spilled some beer on it and its completely unresponsive (only a few keys work), and i cannot find a video of the process. Thanks in advance

Annoying but true. Some idiot decided to use plastic rivets to hold the keyboard in. Thanks Lenovo... Amazon sells a replacement keyboard but screw even messing with plastic rivets.

Man, you can replace only keyboard module. But it is very hard to do. When you disassemble your laptop you need to cut off plastic clips, and after that, you will have access to the keyboard. After replacement, you need to put back your grey metal plate and solder back these small pieces of plastic. Because I had the same problem.

I agree fully! But you need to cut, broke and after that glue or solder :(

So my 'a' key failed after 4 years and so did the space bar. Others were worn. For a laptop marketed for gaming the keys get a good deal of wear so I am surprised the design failed me.

I bought a replacement keyboard for $30 from Aliexpress in China. When it arrived the keys matched perfectly. However, to get into the laptop you have to come in from the back. There must be 20+ screws overall. After removing virtually everything you are met with a plate and about 12 plastic screws that are anchored in with no screw heads. I guess it could be removed by melting the plastic with the soldering iron and removing. You would have to melt them back on though.

For a home repairer like me, I began to just despair. For 2 keys I had spent more than an hour and I was still no closer to removing the old baord. The laptop was 4 years old and, in my view, even if I got into the keyboard it was a nightmare to put back. If I did this every day it might be something worthwhile but I gave up and I will shortly dispose of the parts in the most environmentally responsible way possible.

I have built PCs, changed hard drives in laptops in the past, replaced screens and much more. This device seems designed to be unrepairable except by Lenovo dealers. My guess is that it's deliberately built to be unrepairable.

I tried. It beat me. Its a big job. If the keyboard is the only bit to fail a better option would just be to buy a $10 USB keyboard if you want to keep it running.

Thumbs down for Lenovo. I will never say I won't buy Lenovo again but I will check repair possiblities first.

Got the same issue. My 1 key with the exclamation point has failed. Keyboard replacement needed but no way to do it easily. What a shame.

This has been a good laptop except for how hard it is to fix when things break. On mine, the left-side USB ports are loose and won't hold a cable. They're built ON to the motherboard so there is no way to replace them. I wish I could afford a new laptop... but I can't even sell this one since it's broken.

u can buy new keyboard at lenovospage