Just upgraded machine by replacing internal hard drive with an SSD and added more memory. Everything works great except there's a very minor, mild flickering of the screen.

The whole screen flashes. It's almost imperceptible. And it doesn't do it consistently or predictably. Sometimes I'll look over at it and think it's gone away, but if I stare at it long enough I'll see it.

I may have damaged the display cable when I opened the machine. As I was carefully lifting up the display and removed or removing the vertical sync cable the display data cable popped loose.

I also may have bent the cable by flexing it too much when putting it all back together. It was difficult getting that connector seated. It's not damaged, but it's just in a difficult spot.

The symptoms lead me to suspect a problem with the backlighting. But I wonder if it's the display data cable, since I'm afraid I might have damaged something - either the connections or kinked the cable..

I've gone back in to the machine and disconnected and re-seated all three cables - the vertical sync, the data display and the LED backlight power cables. The issue persists.

The new cable solved the problem!

I was initially afraid that I screwed up the connector for the cable on the motherboard. But after seeing how nice and flat the new cable was and comparing that with the original cable I feel that the original cable had bends and kinks in it that were causing the problem. See the attached picture. 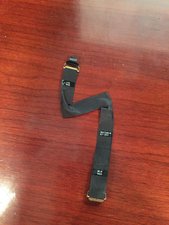 Do you have access to an external display to see if the problem shows up on it. I would start there. If it does then I think you have something on the logic board amiss here Vs the display.

Just hooked up an external display and set it to mirror. I don't see any flickering on the external display. Guess we can rule out logic board problems? That's a relief.

Good! So you'll need to check the cables & connectors on the logic board for damage. Flickering could be the caused by either data or the LED cables so focus on them.

I've ordered a replacement display data cable and will try that as a next step.