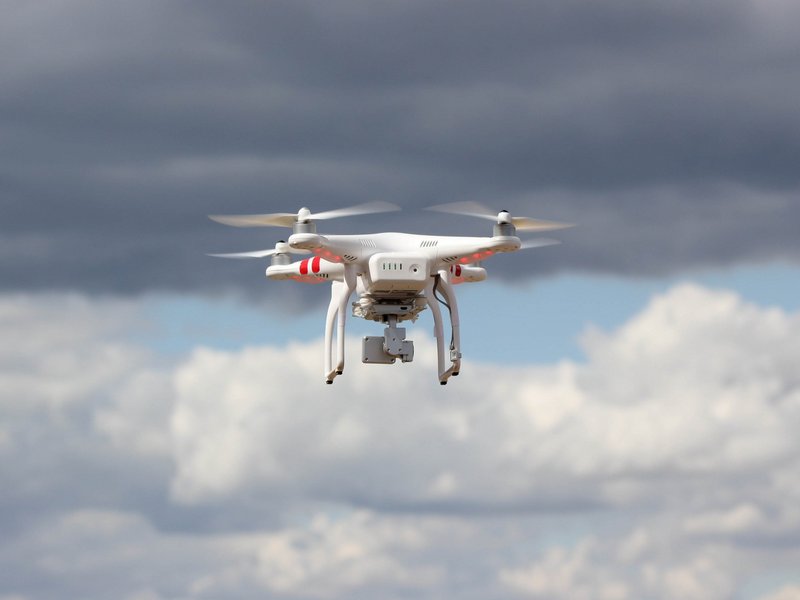 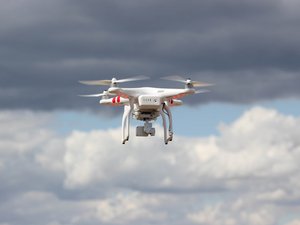 FlyAways occur when a flight controller malfunctions causing the drone to fly erratically and ignore user input often leading to a crash.

Known as a 'FlyAway', erratic autonomous flight has been reported in drones using a Naza flight controller from DJI, most notably the DJI Phantom. During a FlyAway pilots see the drone FlyAway, ignoring their control input. In a few cases, normal control has been regained. With symptoms inconsistent between reported instances, the cause is difficult to pinpoint. Manufacturer DJI has been reluctant to acknowledge the problem.

A survey of FlyAways was started by PhantomPilots.com user 'Spork'. Phantom and Naza users are encouraged to fill out the survey regardless of if they have experienced a FlyAway or not. The survey is available here and survey results are available here. 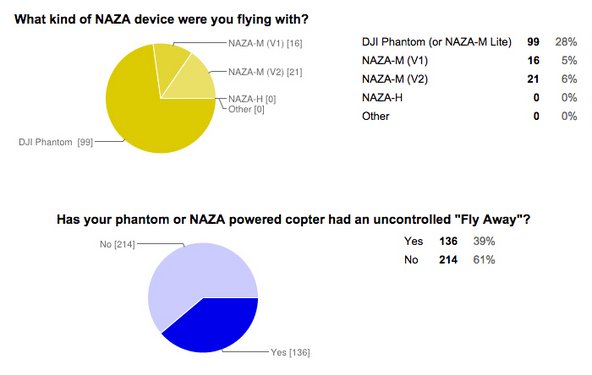 With 39% of survey responses confirming at least one FlyAway with their Naza flight controller, an official response from DJI seems reasonable to expect. The only good news received from the survey comes from Naza-H owners with no reported FlyAways.

Eric Reagan, a journalist for PhotographyBay.com, posted his FlyAway inquiry from a DJI Q&A session during CES 2014. The recorded response is posted here on YouTube.

Unfortunately for Phantom owners, DJI's response to the FlyAway problem was to blame users for not properly following the instructions.

Analysis of a FlyAway

Seeing an expensive piece of equipment disregard your commands and take off in a random direction is frustration at an unparalleled level. Because so many of these FlyAways drones are lost never to be seen again, video footage from any FlyAway can be incredibly valuable in diagnosing the problem. Additional On-Screen-Display video overlay information coming from the flight controller, like what the DJI iOSD offers, can be valuable in conveying internal information about the flight controller at the time of the FlyAway.

After reviewing several videos of FlyAways posted on YouTube there seem to be two different types of FlyAways.

The first is where the drone enters an erratic flight pattern similar to the way in which water drains down a toilet, see here and here. This could be caused by incorrect IMU information causing the drone to become unstable and unable to self level.

The second is when the flight controller receives faulty GPS information either on takeoff when the home location is recorded or in-flight causing the drone to think it is too far from its original takeoff point. In either situation the drone flies in a straight line towards its destination, see here and here.

With inconclusive evidence as to the cause of FlyAways we can only make a best guess as to what causes this erratic behavior with some Naza flight controllers.

It's common to improve GPS performance on Phantoms by putting additional shielding over the GPS antenna, rerouting the GPS cable so that it goes behind the shielding instead of in front of it, and putting extra shielding around the cable itself. Some also replace the ceramic antenna with a better one. This is especially true of the Phantom 2 which has an internal wifi transmitter mounted just under the GPS antenna. There are plenty of videos on Youtube about doing this.

Hi, I have had two p2 both bought used. It was obvious that one was well used and I didn't check it properly. So I pulled it down and found the compass lead loose. In fact it had broken away from the board. On further investigation I believe that the landing sensors are part of the compass so landing became crashing. On the second one I opened it up and made sure all the fittings were together properly before I flew it. After several failures with DJI I have come to the conclusion that their only interest is making money and not interested in customer service unless it gets them more money. The drone industry has just become a huge money hungry greedy industry. Buy a drone and it will not be supported within two years. Following in Apples footsteps.

My phantom 3 standard flew away yesterday, waiting to see what DJI says it was up very high but would not return home and continued on its path for over a mile until I lost all contact. I am hoping for the best from them after walking the swamps and woods and knocking on many many doors and talking to many people. I STRONLY suggest putting a separate gps locator on you drone just not worth what I have been threw. Also posted on CL neighborhood forums and making signs for neighborhoods within 5 miles of home. Was a great drone with great video quality.

mine also had a fly a way it went up and stay in the air and did lost contact with contoler ?

return to home did not funtion :(

why?? and how does this happens?

it was flying at 15 meters and went up out its own and did not lissened to controler!

who has the sollution?

I use a phantom 3 professional. Today, I went through the normal set up process and everything seemed fine. All lights were green to go. But in this case, after take off, the drone ignored my commands to go forward and instead appeared to momentarily come out of GPS mode and into ATI mode (there was no notification of this, it was just the drone behaviour), even though the drone was no more than 3 meters away. Any ideas why this may have happened are appreciated.