Had to get the screen replaced because the non-reflective coating was peeling. It was free from Apple, and I got it back in under 3 hours

Note that the disassembly cost more than the screen itself!

2018 and the phone doesn't have a scratch on the screen (not joking).

I bought it because I had the money, my iPod 4 was dying, my 8th Grade school field trip was to Italy and we could only bring iPods/music players/cameras, no Phones, because we weren't supposed to be distracted with them, (My family doesn't pay international so I couldn't bring it anyway), but still, half the people brought their phones anyway...

My first Apple product turned out to be a cheap refurbished one from eBay (learned our lesson there) I dropped it, the screen popped off, visual display was busted, touch was still working (weird, I know), had a custom SkinIt skin on it... 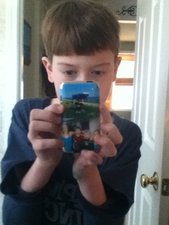 Got a replacement from Apple for $90, and it's sitting in my archive drawer, along with a bunch of old tech boxes and junk.

Originally owned by a company my father used to work for, (He never used it so he said I could have it). (And the company never asked to have it back, lol)

2018 and if you don't turn the screen off it will stain the lcd (leave it turned off for a few minutes and it goes away).

And a bunch of old junk the that I'm archiving