Standby output of Apple's MagSafe Power Adapters varies between models. Yes it is often said to be "6V", but that is "old knowledge" which pre-dates 45W and MagSafe 2 models. (I'll share two standby potentials which I measure: Model A1424 is around 3,15 V; Model A1435 is around 0,6 V.) I hope this little bit of knowledge will be useful to anyone, whom suspects their unit is faulty just because its output potential is not 6 volt.

How To Fix Sticky Keyboard Keys on a MacBook 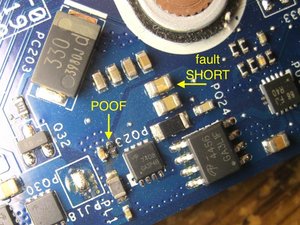 With short circuit pulled, back to operating on "final straw".