We’ve got all the parts and tools to get your Moto Z2 Play working again. 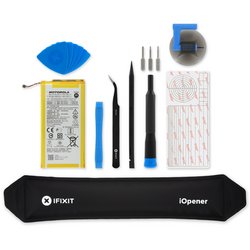 The Motorola Moto Z2 Play is the second edition of the Moto Z Play line and was released in June of 2017. It is available from major U.S. carriers. The Moto Z2 Play looks very similar to the previous Moto Z Play version, so to identify the device as the Moto Z2 Play, look for the following physical characteristics:

One of the Motorola Moto Z2 Play’s signature features is its magnetic back. This feature allows the device to be connected to any Moto Mod. Moto Mods can turn the Moto Z2 Play into a 360 degree camera, projector, video game controller, and much more. The strong magnetic connection on the back of the device ensures the Moto Mod stays on. Each Moto Mod has a one time setup on the device and will be automatically recognized after that.