This is the iPhone that Steve Jobs imagined. He ran out of time to build it, but he built the team that eventually did. We beat the lines in the United States and traveled to Australia to take apart an iPhone X in the future and find out how his vision was finally brought to life.

The iPhone X opens from the side just like the 7 and 8—but inside, it’s a whole new ball game. When it comes to hardware, this is the most densely-packed gadget we’ve ever taken apart. Thanks to drastically shrinking the bezels, the iPhone X sports the largest display of any iPhone—in a smaller form factor than the “Plus” devices. That super-sized display needs a super-sized battery, and there wasn’t room with the iPhone’s traditional layout. The solution? An unprecedented degree of miniaturization of the main board. Apple effectively folded the logic board in half—and soldered the layers together—to free up valuable real estate for the Plus-sized battery. In its compact and stacked form, the iPhone X logic board takes up about 70% of the area of the iPhone 8 Plus board. Separated and spread out, the X’s board is actually 35% bigger than the one in the 8 Plus—which leaves plenty of room for new goodies, like hardware to power FaceID.

The closest thing we’ve seen to the iPhone X’s stacked logic board is the one we found tearing down the original iPhone. Of course, the new phone’s case—with its metal frame and subtle curves—also pays homage to the original. Ten years of iPhone, one design team. Even after a decade of iteration and innovation, Apple has built a device that evokes the spirit of its greatest visionary. 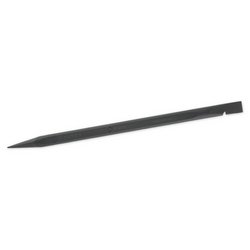 A tougher take on a favorite multitool.

Check out the full iPhone X teardown on iFixit.com for even more analysis.