Yellowed kitchen appliances, dust-streaked radios, unresponsive DVD players: the table was strewn with stuff that even a local thrift store’s discounts couldn’t make enticing. Most of the electronics were broken and all of them had outlived their usefulness. But you wouldn’t have known it by the number of children—screwdrivers in hand—who crowded the table that day just to get a look inside of them. 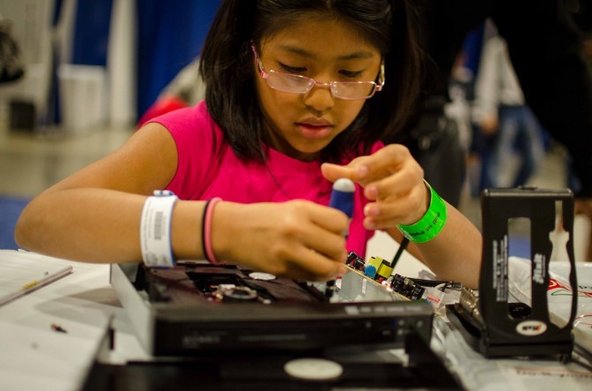 The demographic at the last USA Science and Engineering Festival was a little different from the one I usually cater to at iFixit—a free online repair manual for everything from cracked iPhones to DIY oil changes. My company’s mission is to teach as many people as possible how to fix the stuff they own—kids included.

And kids were just as eager to learn as we were to teach them. The festival warehouse was crowded and noisy, but once they pried up the hood of a device, the world faded to mute as pint-sized tech magellans explored circuit boards and examined old motors. One middle-schooler spent two hours working on an old VCR. Time well spent, because he got to watch the old relic whir back to life—a mixture of surprise and elation on his face.

Kids are born tinkerers. They have the natural inquisitiveness of engineers. All they need is someone to put an iPod in one hand, a screwdriver in the other, and ask, “Do you want to take this apart?” And when I ask that question, their eyes go wide with astonishment. After all, their parents have been telling them not to take things apart their entire lives.

As adults, we are just as obsessed with toys as our kids are—of course, ours are more expensive. And the places we keep them tend to turn into adult-only zones: the glass-paneled entertainment center, the cloistered iPhone pocket of a handbag, the high-tech man cave. All of it is kept out of reach.

Once you give them permission to play, everything changes. Children are curious. They want to know what makes that mysterious machine tick. Taking apart a piece of hardware answers the eternal “how?” that is always on a child’s lips. For them, it’s an opportunity to find out how the world works.

I’ve even found that kids are more interested in learning engineering than adults. Give kids something to take apart and their faces light up with excitement. Give adults the same device, and intimidation clouds their faces. That fear comes from a lifetime of feeling like electronics are beyond our ken, a feeling ingrained by a society that constantly reminds us ending is better than mending.

That’s why it’s so crucial that we get to boys and (especially) girls early—before the sense that we can’t-do overwhelms the belief that we can.

When that happens, we go through life never the wiser as to what’s inside those inscrutable black boxes. And as long as they work, we don’t really care. The problem: it’s pushing a generation of students away from critical industries.

In 2010, less than 5 percent of the American workforce was in science and engineering—and then only 25 percent of them women. Maybe that’s partly because so many people are mystified, baffled, even frightened by technology.

We need to stop treating electronics as an “adult zone.” Properly supervised, most electronic repairs are far less dangerous than, say, football.

And I bet it’s easier than you think. There’s nothing inherently more difficult about changing an iPod battery than putting together a Lego model. The tools are different and the parts are more varied, but the process is similar. So, take old cell phones, MP3 players, computers out of your drawers, basements, garages. If they’re broken, figure out how to fix them—then use them or give them away.

Kids take to repair really quickly. Every time we host a fix-it clinic, kids who have no prior repair experience are able to fix their parents’ electronics. When we went to Egypt and Kenya to film our repair documentary, Fixers, we saw school children in Nairobi who had learned electronics repair as part of the curriculum. We hear regularly from young teenagers who used iFixit guides and tools to start small repair businesses—some of those kids are highly successful.

Taking complex machines apart teaches engineering. That’s why we should build opportunities to explore electronics into curriculum. That’s why parents should help their kids take stuff apart. So get a good screwdriver and rescue some moldering electronics from your garage. If you give your kids permission to play, learning science and engineering will look like fun.

This story also ran with Good.is.