Hot on the heels of last week’s BlackBerry Z10 teardown, the HTC One landed in our hands and was quickly deemed teardown-worthy. So we cleared the operating table, sharpened our spudgers… and that’s where the excitement stopped. As soon as we had it out of the box, our opening skills were put to the test. And we don’t like to be tested. We speedily dislodged the screen from its aluminum shell, but things didn’t look so rosy from there on out. 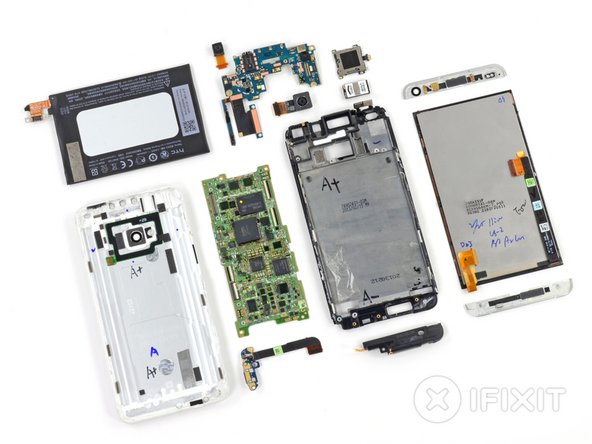 It turns out that the HTC One’s guts are glued into the machined aluminum casing. So if you want to replace anything inside, *at best* you’ll just disfigure the perimeter of the device. Even worse, you may inadvertently mangle a speaker or cable during the opening process.

The HTC One earns a 1 out of 10 Repairability Score, a first-ever for a cellphone. The score is fitting, given its name.

* HTC has said over and over that they wanted to create a seamless product, and the absence of any exterior screws is a testament to that. Unlike the iPhone’s volume buttons, which protrude from the case, the One’s buttons lie flush with the sides so as not to interrupt the body lines.

* A small amount of heat and a suction cup were all that was required to create a gap in the One’s zero gap construction.

* While the display can be lifted, it can’t be removed without first disconnecting the display ribbon cables, which are routed underneath the case assembly. Our initial victory was short-lived.

* It took us over half an hour to separate the rear aluminum case from the functional components of the phone. Worse yet, our diligent spudgering appears to have permanently mangled the plastic bezel surrounding the aluminum case. It’s possible that prying at a snail’s pace while applying heat could minimize this damage, but we’re not too hopeful. This phone was not made with openability in mind.

* Around the camera bezel we find the near-field communications (NFC) antenna and its pressure contacts. NFC has recently become pretty standard in the smartphone industry, something that might have helped the Nexus Q gain more traction last year.

* With the rear case off, we find the One’s report card. It looks like straight As to us.

* All chips are located on the front side of the motherboard, and they include:

* With the motherboard removed, we’re finally given access the sandwiched-in battery. After some prying and peeling, we’re able to slowly extract the well-adhered battery off the midframe. The 3.8 V battery is rated at 2300 mAh and weighs 38.3 g. For comparison, the iPhone 5 has a 3.8 V, 1440 mAh battery, and the Galaxy S III has a 3.8 V, 2100 mAh unit.

* The HTC One’s 1080P, 468 ppi resolution rivals today’s HDTVs and the 10.6″ Surface Pro, but in a 4.7″ size. Just like the battery, this component can’t be replaced without removing everything from the rear case… and then taking out the motherboard.

* Off comes the 2.1 MP front-facing camera. This teeny-tiny unit is labeled H1X1305 067521. Aside from the inscription being a partial Montreal postal code, we’re not sure what manufacturer/model it indicates.

* On the back there’s an HTC UltraPixel camera, a f/2.0 aperture, 28 mm lens camera with a dedicated HTC ImageChip 2.