Prior to starting the teardown, we guessed that the glass front panel was no longer held in place by tabs. We were correct. The new tapered edge on the iPad 2 prevents any kind of tabs from being used; instead, Apple engineers used generous helpings of adhesive to keep the front glass in place. 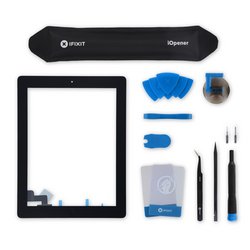 Replace a screen compatible with iPad 2. Includes the glass touch panel portion of the display digitizer screen, a blank home button, and adhesive.

Consequently, the front panel is very difficult to remove — it’s nearly impossible to open the iPad 2 without shattering the glass. We’ll be working hard in the forthcoming weeks to provide a solution to this problem, but for now: please don’t open your iPad 2.

The iPad 2 received a 4 out of 10 repairability score, mainly for the extreme difficulty of accessing anything inside. But if you do manage to get in, you’ll find that all screws are of the Phillips variety, and the LCD can be easily taken out once you separate it from the front panel glass (but separating it from the glass is difficult, of course).