We glossed over one very important detail when we tore apart Microsoft’s new PMP last week. The Zune HD is the first mass-market gadget we’ve seen that has a machined aluminum case!

Machined aluminum parts are harder and more rigid than plastic parts, at very little (if any) cost to the overall weight of the device. Machined aluminum is also not as easy to dent or mar as the plastic counterpart, meaning that the Zune won’t suffer from case scratches that plague other music players. So what’s the catch? The main negative factor in using machined aluminum parts is the increase in manufacturing cost.

If you’ve ever opened up a recent MacBook or MacBook Pro, the milling pattern on the Zune’s back panel will look familiar. The mill’s bits start out large, and progressively get smaller as the internal features of the shape become pronounced. Every milled part includes a “final pass,” a slow and light finishing pass that provides a smooth final surface. We measured the final pass milling marks and found that Microsoft used a 3 mm bit on the Zune HD, while Apple used a larger 3.5 mm bit on our MacBook’s upper case. Interestingly enough, the Zune’s milling marks are readily more apparent than those on the MacBook, as evident in the photos below. Apple must have polished the interior side of the upper case to achieve such a smooth finish.

Microsoft has spared no expense on the Zune HD. The guys at iSuppli may prove us wrong, but we’re doubtful that Microsoft is actually making money with this product. Consider that they put an OLED screen, machined aluminum back cover, top-notch processing power, and solid user interface in a 32 GB package retailing for less than $300.

When we conducted our teardown, we found that Microsoft went the extra mile and engraved a “For our Princess” on the inside of every Zune HD as a tribute to a Zune team member who passed away during development. The cost may be meager—a couple of seconds of additional machine time—but their sentiment was priceless. With traditional manufacturing process, changing a mold at the last minute to add an engraving would be prohibitively expensive, but their new milling process allowed Microsoft to add a touching note without substantially increasing their costs. 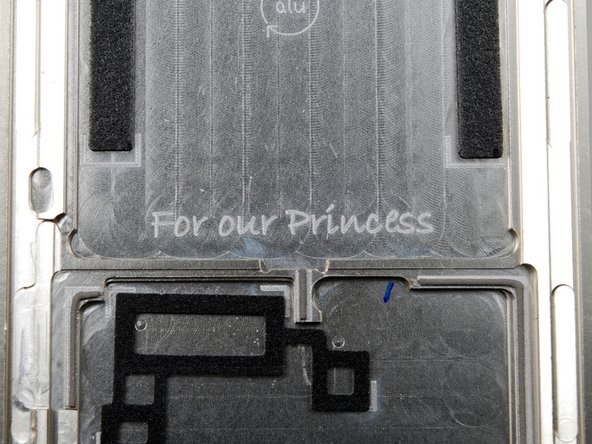 So what’s this mean for the future? Microsoft has beaten Apple at their own game and produced a multi-touch PMP that is smaller, lighter, and vastly easier to repair than the iPod touch. We expect other devices to follow the Zune’s lead. Expect to see other companies use advanced manufacturing processes and materials to add rigidity, substance, and flair to their products.