On a Delhi street, a group of men load a pile of power supply units (PSUs) and optical drives into a truck to take them for extraction of copper. 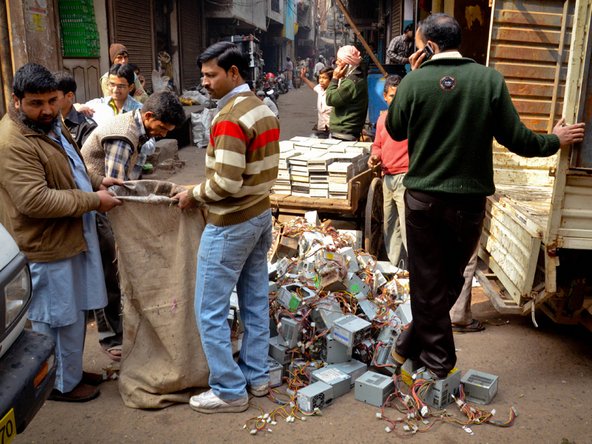 We took this photo in Seelampur, on the same trip during which we visited a garment factory and met the man who fixes their sewing machines. The largest electronics scrap market in India is in Seelampur. 80,000 people in India work in the informal e-waste recycling sector. At what point does the value of a computer drop to that of its constituent metals?

This pile of power supplies are on their way to another part of the market where they’ll be disassembled to harvest the valuable scrap metal within. An average desktop computer has about four pounds of copper, a good chunk of which is contained in the PSU.

Some e-waste recyclers in India employ modern, environmentally sound techniques—some are even ISO 14001:2004-certified. Other recyclers in the informal sector, however, extract the metals in open acid baths, which is dangerous and releases harmful toxics. Even this close to the end-of-life, it’s very difficult to tell whether or not they’ll be disassembled responsibly. The best way is to follow the truck.

I love the juxtaposition of old and new technology: power supplies in a burlap sack, optical drives on a wooden-wheeled cart, and three people on cell phones beneath a makeshift awning and a tangle of wires.

Why Is Every E-Waste Infographic Misleading?