ICYMI, Apple’s having a midsummer’s nightmare:

Now picking up where we left off on Friday, here are our MacBook Pro 13” Touch Bar Teardown highlights:

The 13″ MacBook Pro has a brand new power adapter: A1947. It boasts more shielding and impact-resistant foam, but unfortunately the metal USB-C port has been swapped for a plastic one.

Hey, Siri! We found your T2 coprocessor. And despite all that extra power under the hood, the design of the modest heat sink system is seemingly unchanged.

Unfortunately, the RAM, flash memory, and processor are still soldered down. Even the upper case—keyboard, battery, and speakers—is a single unit, making components a nightmare to replace. 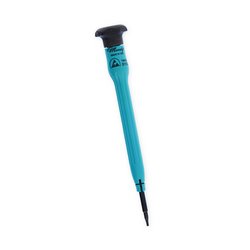 Compatible with the type 5IPR fasteners used on MacBook Air, MacBook Pro Retina Display laptops, and Toshiba drives. Professional, Made in the USA.

Update 7/19/18: MacRumors has leaked an internal document from Apple Authorized Service Providers confirming that the purpose of the keyboard membrane is to “prevent debris from entering the butterfly mechanism.”