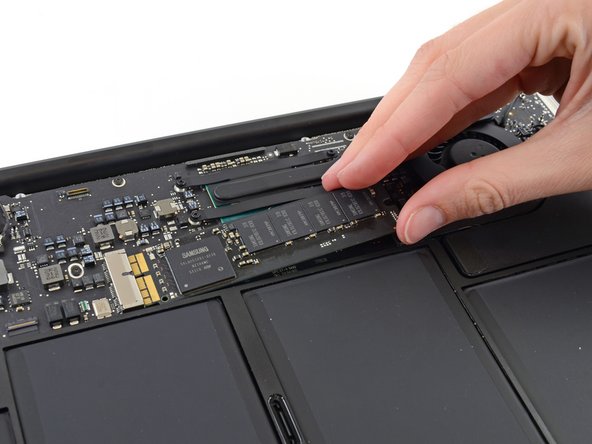 Use this guide to upgrade or replace the solid-state drive in a MacBook Air 13” Early 2015. This MacBook Air uses a proprietary storage drive connector, and is therefore not compatible with common M.2 drives without the use of an adapter.

Before you perform this repair, if at all possible, back up your existing SSD. Then, either familiarize yourself with internet recovery or create a bootable external drive so you’ll be ready to install macOS onto your new drive and migrate your data to the new SSD.

Finally, we strongly recommend installing macOS 10.13 High Sierra (or a later macOS) before replacing the original SSD from your MacBook Air. Most new SSDs require updated storage drivers not found in versions of macOS prior to High Sierra.

Take your e-waste to an R2 or e-Stewards certified recycler.

Repair didn’t go as planned? Try some basic troubleshooting, or ask our Answers community for help.

Take your e-waste to an R2 or e-Stewards certified recycler.

Repair didn’t go as planned? Try some basic troubleshooting, or ask our Answers community for help.

Great... Now tell me where I can get an SSD for this machine.

yes) and prompt and appropriate model that was not inferior in speed built.

Dave, I am sure these are M.2 SSD. I am not sure what apple uses but at least you have somewhere you can start for research

That’s indeed an M.2 SSD but you’ll need an adapter as the one that came with the Macbook uses a proprietary connector.

Is there a way to upgrade it ? I cant find a bigger SSD which can be installed on this model.

Any update is welcome.

OWC has SSDs for specifically for MacBook Air. You can get them here: http://eshop.macsales.com/shop/ssd/owc/m...

I upgraded my MacBook Pro Retina with an OWC SSD and it worked a treat. I went for a kit that included an external chassis for the drive I swapped out. It makes an incredibly fast and portable external drive.

NOTE: Changing the drive voids the warranty, but if you swap your existing mac drive back in when it goes for repair everything is fine. I know because I have also had to have my Pro serviced.

the maximum memory for ssd ?

Does this upgrade apply to this MacBook= MMGF2LL/A?

Since there is a not much of a difference between the MacBook Air Mid 2017 and this one, would it be possible to move my 128 GB SSD from my old MacBook Pro 2015 into the MacBook Air 2017 same way ? Konsidering keeping the data how would i handle the os configuration differences ? Thanks in advance.

If I want to take an SSD from a damaged macbook air (SSD is not damaged) and put it into a model with a smaller capacity SSD will it turn on and work from the SSD I put in? I am wondering if there are additional steps to get one macbook air to boot from a hard drive from another.

I have an adata sx6000 m.s 2280 pcie and adaptor for my macbook air early 2015. The macbook does not at all recognize the drive. its as if its not installed. i tried the drive on a pc and know it works.

Additional info: you can use normal m2 ssds in your macbook using an Adapter. You can find Infos with campatible ssd types on this site: https://macandegg.de/upkeep/macbook-air-...

sorry for this Website being German but you can see that e.g. for a macbook 7,2 you can use nvme ssds with Adapter. There are also examples for ssds to use but u dont Need exactly the ones linked there, also some ssds similar to those will work just as fine. have fun

I can remove ssd of mac old and install on new mac air without problens?

Do i have to use the same ssd?

and how do i know which SSDs are compatible with my mac air 2017?

Review this guide The Ultimate Guide to Apple’s Proprietary SSDs

Is the default ssd installed on this mac sata or nvme?

do i need to prep the new SSD? or do I just swap them out?

Just did mine, create a mojave bootable usb drive and swap them. No other work needed

I need to transfer the data to Mobile drive 1TB (because my Mac won’t work any more, it needs the logic board to be changed).. so my question is:

Hi, I have this 2015 model which won’t turn on. Is there an USB external ssd card reader on the market so I can recover the data on my ssd card, once it is removed?

Yep, there sure is! Right here.

Do I need make some boot to instal the Mac OS in the new ssd?

If you are using a Apple blade SSD you don’t. Some 3rd party drives may need it.

Can I use SSD from older Macbook Air Early 2015 on my Macbook Air 2017? Is there any compatibility or performance issues?

Yes! Apple used the same interface (SSD) across both.

Before my 2015 mba crashed I had El Capitan running. Are there replacement SSDs that would be compatible?

Reference the guide just above

thank you very much! Everything went fine. New SSD from OWC is working well. This is the first Mac (MacBook Air 2015) I have opened and repaired - and it is still running :-)

Next project may be a battery replacement on an iPhone 6s…

Thank you very much for the guide! I have one question: I installed a Sabrent Rocket Q 2TB NVMe. All works well, but I’d like to put a thermal pad on. I’m thinking a pad that connects the SSD to the lower case. (I’m thinking SSD->pad->copper->pad->aluminum case.

My question is: what is that black stuff on the inside of the lower case? Is it thermal padding? Should I remove it and then put a thermal pad there?

Thanks for the answer. NVMe SSDs do get quite hot. The usually come with a thermal pad and are installed with heat sinks. And I can feel the heat coming off it when there is a lot of disk activity.

But I just want to know what the black stuff is…

Not that simple! The amount of data being moved is the factor of how much heat your SSD will produce.

Even still the SSD has internal sensors which will dial back the throughput if needed. Unlike HDD’s which when they get hot can distort the patters, SSD’s don’t have such limiting factors.

I have a 2013 MacPro which came with a heat sink on its original SSD as at the time the SSD technology was still new and Apple wanted to be safe. With newer generations of Apple blade SSD’s Apple realized a heat sink was not required. Just look at the current MacPro MacPro SSD Here Apple only has a metal EMI shield around the chips no heat sink!

The key is having enough air flow getting to the drive, a heat sink needs a way to off load the heat, Your idea doesn’t really improve things.

BTW: I run my system very hard when I’m working on ultra-large images and my 4TB internal SSD gets warm it is not getting to the point of melting ;-}

I doubt your MacBook Air is able to sustain the level of performance my MacPro is able to run at, Maybe you should look at getting a bigger SSD as a drive which is running hot tends to be fighting its self trying to move data on the drive around for wear leveling. I’ve seen that often! As the drive is too full.

Thanks. I’m mainly worried about SSD lifetime. But what you say makes sense. I’ll try without a thermal pad for now.

There is nothing to stop you within MacOS, even still the MacBook Air is a more limited system between the CPU & RAM resources as well as it’s battery. I wouldn’t recommend doing this as I’m suspecting your workflows for so much data is likely to heavy for this system.

If your question could it be done, yes, just not wise.