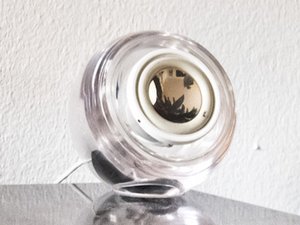 Repair and troubleshooting guides for the Apple Pro Speaker, which has the model number M8756 These are Harman Kardon-built speakers with an Apple proprietary connector. They are only compatible with the iMac G4 and PowerMac G4.

The Apple Pro Speakers are a set of wired speakers manufactured by Harman Kardon, a subsidiary of Samsung Electronics that makes audio systems. This company has collaborated with Apple to make several speaker systems, including these speakers. The Apple Pro Speakers were announced by Apple along with the Power Mac G4, a series of personal computers, in 1999. These speakers have a unique rounded shape with a flat face for the speaker, and they also have the same transparent look that is present in several other Harman Kardon/Apple collaborations like the Soundsticks.

The Apple Pro Speakers don’t have a traditional 3.5mm headphone jack, which is compatible with a wide range of devices. Instead, they use a specific proprietary connector (sold exclusively by Apple) that is only compatible with the PowerMac G4 with Digital Audio and the iMac G4. This limited and somewhat confusing compatibility was just an early instance of Apple’s tendency to make and sell items with limited compatibility and proprietary cables, so that users have to purchase other Apple-brand items for them to work.