My MacBook is turning off randomly, no matter plugged / unplugged

I have tried to reset SMC, PRAM, reinstall completely software (installed Catalina instead of Big Sur – in case if the older computer has problem with the newer system (as before Catalina worked perfectly fine and I had the feeling that Big Sur came with some smaller problems such as lowering battery capacity). I tried also to measure CPU and GPU temperature and this seemed also fine (when too hot, Mac turned on fan and cooled the computer down). For last few months, I have under the battery icon a message saying: "service recommended". I wonder if it could be a problem with battery not supplying the hardware with power properly? I tried coconut battery app to find out the condition of the battery:

I see from this that the battery is 19% charge capacity less from its full potential, a lot of cycle counts, other than that I don't know what to read from this. Strange thing to me is that it charges with 23.23 Watts only when a new original cord with 80 Watts is plugged.

The behavior is like this: sometimes the computer freezes at one point, I can't do anything, then the fans go on and then it dies. Sometimes it just turns black suddenly. After switching on again, everything that was opened reloads (it doesn't even ask for password).

I opened the lid, and it seems clean on the first glance. ( I removed dust, checked whether the battery is not swelling, there was nothing like traces of smoke, melting... and so that seems fine – but I am not well experienced and didn't dive deeper than that)

Do you guys have any idea?

The computer was repaired two years ago after a tea had been spilled into it.

There's a picture from CoconutBattery with a new battery: 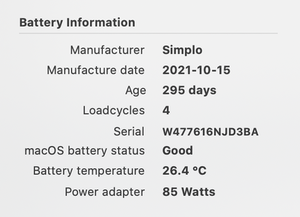 I downloaded TG Pro as suggested and here's the result: 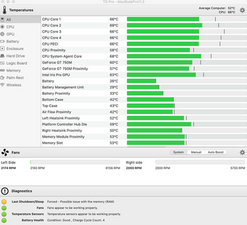 I got curious about this warning: "Last Shutdown/Sleep: Forced – Possible issue with the memory (RAM)". So I followed some guidelines for checking memory, using "Memtest 86+". No problems seemingly with RAM... This snapshot was taken just after testing the memory for like 3 hours, so therefore quite hot still. 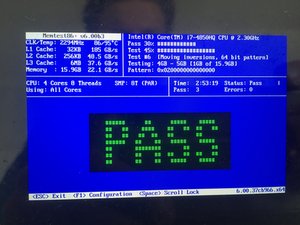 @manojay - Not needed! Just wanted to validate the battery was good, which it is!

But now we need to figure out what's messing you up! Lets give this a try, Restart your system and press the D key to enter into the onboard diagnostics. Let us know if you get any errors.

If that fails to run (as Apple messed it up on some firmware releases) you'll want to download TG Pro and you'll need the full version to get the diagnostics within it.

Diagnostics doesn't work, even when pressing Opt + D.. So I downloaded TG Pro – it's updated in the post

@manojay - The RAM error condition TG Pro pointed to could be an OS issue as well. RAM testing is still a bit of a gamble as sometimes its still not caught.

I would check for Malware/Spyware and Viruses! Also take note the next time what apps (and extensions) are loaded in RAM as any one could be the source of the issue.

Hey many thanks for tips!

I personally think it is a problem of hardware. I tried already reinstalling OS, I had Big Sur and I thought that it might be a bit problematic OS for my older Mac. So I downgraded to Mojave, and now I have Catalina. The computer is almost clean, not many apps installed. Still it persists. I forgot to mention that at some point, the screen slightly flicker in the darker parts – especially after booting. I read somewhere that it might be issue with SSD, but S.M.A.R.T. controlling technology says it should be fine...

Sorry to say it time for a new battery!

Think of it this way... You buy some potatoes back in 2013 they are sitting in the cold cellar would they be eatable today? Of course not!

Battery are no different the chemistry breaks down by age and in the number of cycles. Here you have the double whammy! This is the original battery the system was sold with (batteries have about 4 years of life) and is way over its expected cycle count of 1,000 Determine battery cycle count for Mac notebooks

Hi, thanks for the answer!

I did successfully change the battery and was very happy for the first moments as it was lasting very long time without charging. No freezing, no shutting down. But now, after like two weeks, even with the new battery, the same problem started to happen again. I tried to reset SMC again... I realized that I can recognize the state of the computer when freezing and shutting down will occur as it starts to be quite hot. Can it be heat sink? Cuz that's the part what's quite hot... The SMC sensors (CPU+GPU die temperature) don't show me too high temperatures... Mystery.

@Martin Dušek - Lets get a fresh CoconutBattery snapshot with the charger plugged in.