Port on network card stuck to the cable

i pulled it out wrong but instead of the port just breaking off the network card it stuck to the head of the cable, ive replaced the card but i cant get it in the port. see photo, the one on the left is the working one but the one on the right is the broken one 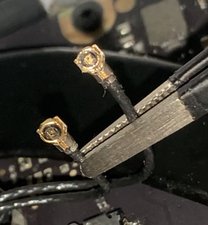 currently with 2/3 connected wifi works but it wont connect to 5GHz networks. 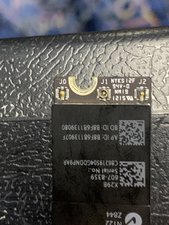 the one on the right is the broken one.

I can't see the photo because its in the comments

is it the one in the question?

@hellomacos i added an answer with the photo attached

Thanks for the photos

I’m sorry to hear that this has happened;(

But we can fix it

There’s 2 ways we can go about this

i tried with the sharp tweezers in the pro tech toolkit and they didnt work, any other tips to get it out?

can you upload some photos of the old wifi car just so I can get a better idea of what part is stuck:-)

I encountered this once before! And I suspect this is not your fault!

These connectors tend not to hold onto the boards connector side to well as the cable end gets distorted so it doesn't bite into the its mate properly.

Basically, it just pops off... So what to do?? GLUE IT Who would ever know! So the next repair person gets stuck with not only fixing the damage from the first repair, now in trying to fix the system an expensive part is damaged in the process!

I don't think you'll be able to get the ring element off the cable end as they likely used cyanoacrylate glue (a.k.a. Krazy Glue)

OK double dammed! So how to fix this. I hate throwing parts away that can be fixed you can get these small coax connectors (both female and male) the board connector is the easer one to replace with a small soldering iron or hot air rework station. The cable end is not so easy!

As you've already replaced the board lets focus on the cable ends. I would recommend just replace the cable or the full antenna assembly as that is the easier way. Follow this guide to get the display assembly off to gain access to the assembly to desolder the bad cable or the full assembly MacBook Pro 15" Retina Display Mid 2012 Display Assembly Replacement. Once you've got the display assembly off you can then slide the black plastic clutch cover off as just under it is the antenna assembly.