A few months ago, I replaced by battery (from a third-party seller, not ifixit). It was working great, until recently, when it ran out, then was plugged in overnight and got stuck at 55%. Unplugging it and plugging it back in resulted in it very slowly charging up to 60%. It is stuck at 52% right now. I've tried a SMC reset, I've tried calibrating by fully discharging, and I've tried reseating the connector. 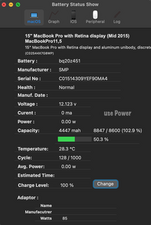 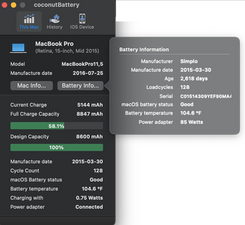 The computer doesn't shut down gracefully when the battery runs out; it always hard powers off around 5-10%. This has been an issue since before I replaced the battery.

BatteryStatusShow, already in the post, has all the same information but if you insist, I'll post a CoconutBattery screenshot.

@stapledbattery - I need a bit more than what BatteryStatus offers.

Well the Battery is showing its age ;-{

You have two things coming at you age and cycles!

The age of your battery is now over seven years old (2015 - 2022) for a battery which lifespan is about five years. The batteries chemistry breaks down.

The cycle count is 138 currently, this battery has an expected cycle of 1,000 cycles (+/- 10 %) Determine battery cycle count for Mac notebooks

So I would say its already on borrowed time! Time for a fresh battery. You should be able to get at least 5 more years if you give it the needed TLC.. You might try resetting the SMC How to reset the SMC of your Mac but that will only buy you so much. Sorry ;-{

This is obviously copy pasted and you didn't read my question. I already reset the SMC. 138 cycles is way under 1000. Sure the battery may have been manufactured in 2015 but it was unused until 2021. This is not a case of normal aging.

@stapledbattery - No I did and your issue is age, but has nothing to do with run time which you think makes a difference. Batteries are not stable! Where you can put them on the shelf and expect them to work at the same (or even slight less) performance. And No I didn't copy and paste, these are my own words and my own thoughts from years of experience.

As far as SMC, some people don't get it to work the first time or fail to use the correct keys. If you noted it was the last item not the first and it was just a hail-mary effort as I expressed "but that will only buy you so much."

So from someone who has repaired Macs for over 30 years I guess you know better.