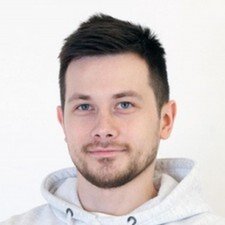 Should I trust my battery vendor?

UPD. It turned out to be quite a lengthy question, so I highlighted the key points in bold.

The cycles of my original battery began to exceed 1.3k, the capacity dropped to 67.8%, and the operating system began to report that "Service Recommended."

I decided to replace the battery and searched for a local battery dealer (iFixit won't ship batteries in my area) and tried to find a brand-name battery of some sort. I found something that the seller claimed was a product from BayEagleEyes Technology Co. for about $97, which I bought.

Immediately after replacing it, I charged the battery to 100% and left it plugged in for a couple more hours. After that, I looked at what capacity the battery was showing. Unfortunately, it displayed 5846 mAh instead of the claimed 8775 (just 68%).

I decided to calibrate it. To do that, I discharged it before turning off the laptop and left it turned off overnight. In the morning, I plugged it in and fully charged it again. Now the battery was showing even less, 5590 (65%).

So, I reset the SMC. Then, I repeated the charge-discharge-recharge cycle. Again it showed even less, now 46 mAh (62%).

With each charge-discharge cycle, the displayed battery capacity was dropping. 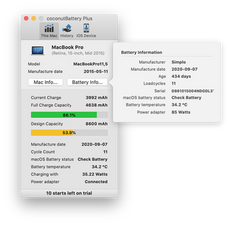 However, I noticed one oddity - the indicated charge percentage mostly dropped evenly, and then at about 6-7% it froze for about an hour.

I wrote to the seller. The seller answered that the only sign of a bad battery could be the battery life. A non-genuine battery in an Apple device will never show the actual charge and percentage, they said.

I set up an experiment. Fully charged this new battery, turned on the computer, and loaded the CPU to 100%. The battery lasted almost two hours.

What to do, who to believe? Should I insist on replacing the battery? Perhaps there is some magic calibration that will make the new battery show the correct numbers?

You should try to return that battery and get this one instead
https://eshop.macsales.com/item/NewerTec...

I got a battery and ram from them There REALLY GOOOOOOOOOOODDDDD

By the way where did you get that battery you got

I reside in Ukraine. Unfortunately, the regulations here do not allow the shipping of Li-ion batteries by air. So I couldn't order it at MacSales or elsewhere.

I got it from a local equivalent of eBay from a seller with a high rating.

:/ EBAY IS THE WORST PLACE TO GET IT

theres alot of stupid scammers for that part

Ouch! High Ratings are fixed! Look for a brick and mortar store front if that don't have a proper business address you are likely to get scammed!

Clearly this battery is bad! It also appears to be quite old. Cycles are one thing but so is shelf life and running time.

Have you tried going to the nearest major city to see if there is a Mac store there that can help you.

The other option is see if you have a friend traveling from one of the EU countries who can buy a battery and hand carry it on the flight that is allowed.

> Have you tried going to the nearest major city to see if there is a Mac store there that can help you.

@danj I live in the capital, can't go much more major than that without crossing the border ¯\_(ツ)_/¯

The issue is that it seems the whole market for Apple spare parts is a bit shady here. Everyone sells aftermarket parts, labeling them as "original" and "made by Apple". It isn't straightforward to figure out what you are actually buying. So frustrating!

So I went with the first vendor I could find stating the genuine source of a part, a particular Chinese factory, to appreciate their honesty. It didn't seem to help, however.

We do have Apple-certified repair shops here, though.

> The other option is see if you have a friend traveling from one of the EU countries who can buy a battery and hand carry it on the flight that is allowed.

Good point, thank you. That should probably be my next option. However, that would mean some logistical issues with the warranty and returns.

@borodean - iFixit has a storefront in the EU! EU Store

And they also have a Russian storefront too! RU Store

So you could make the purchase and have them ship it to your friends home.

One thing I will tell you that the battery wasn’t as expected but leaving overnight without any power caused more harm than good which is normal behavior for any batteries. That’s never leave phone, or laptop totally dried up for long time if you care to preserve the battery life.
Just saying,

try returning your battery and see you can get another one.