Both Triggers are reading 100%

The controller I am trying to fix is a model 1914. For some reason, that was not an option.

Using Game controller tester on my PC, I am seeing both triggers activated to 100%. They are not stuck, they are simply reading as if they are both fully pressed in. When I turn on the controller, the reading isn’t 100%, though. If I click any other button, (doesn’t have to be either of the triggers) both of the triggers then read as activated to 100%. 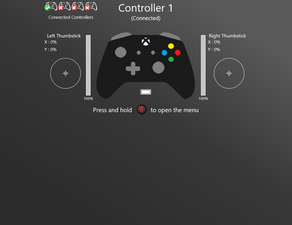 There doesn’t seem to be anything else wrong with the controller.

With that being said, it seems unlikely that both hall effect sensors broke simultaneously, and now return 0 volts each, signifying that the triggers are pressed 100%.

My next best guess would be that the line from those sensors to the chip on the board that reads the voltages from both of those hall effect sensors has been interrupted. I’m imagining that the data line for each of these sensors come together somewhere; and that is where I think the problem is.

I’ve been looking for a data sheet for the 1914 controller, and I haven’t had much luck. Before I take everything apart and try to reverse engineer the PCB, does anyone have experience with these sensors, or know where I should be looking specifically on the board, that could maybe help me out?