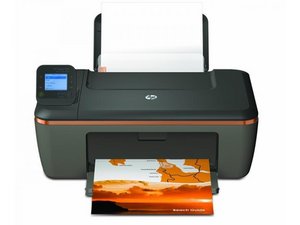 After the sucess of fixing a reluctant display, I’m now presented with a PC power supply that’s decided to throw in the towel.

Said PSU is about 5years old, and thanks to MS patch tuesday forcing a reboot of the computer, it then failed to start, the case power LED blinks once, whilst the internal fans spin for about half a second, then a faint click, and it goes dead. A short while (20/30 sec) later, it tries again, with the same results.

Sounds like the PSU is attempting to fire up, but isn’t getting there somehow.

Pulled it out, popped the lid on the PSU hoping to find some easy to replace capacitors bulging a bit, only to find everyhing looks as it shoud (bar the dust): 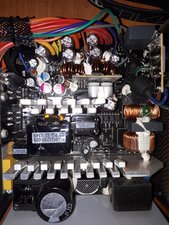 Any thoughts as to any avenues I can follow regarding testing before I can it and buy a replacement?

If you’re not even reach a Windows splash/error screen you’re definitely looking in the right place for a physical issue of some sort.

I’d pickup a PSU tester on amazon (https://www.amazon.com/Computer-PC-Teste...) and test it. If you for have a known-good power supply, I’d connect it and see if that allows boot.

Additionally, flip your PSU power switch off for several seconds and then back on. I’ve heard of this resetting internal breakers in some PSUs, but I’ve never personally confirmed it/seen documentation of such. Haven’t searched/tested specifically for it though.

If it tests healthy, a swap with another PSU produces no change, and the switch flip does nothing - potential motherboard failure would be my next stop for testing, but most of the time I’ve encountered that on the rare occasion I was lucky to still receive error beeps from my board for troubleshooting during attempted startup.

Absolutely - popped a spare PSU in, and the PC is running fine. My conundrum now is why the old PSU failed.

If some are low or even missing then check the capacitors in the failed PSU i.e. bulging or blown and also for any other components that look stressed or heat affected.

SMPS power supplies put a lot of stress on the components.

Be careful if testing inside the PSU without a schematic as there is exposed lethal AC in there. It is safe on the output harness connections though as that is DC although you don't want to short that out either

tried the 'paperclip test' and initially the PSU just attempted to spin the fan a few turns, then stop, then spin again, then stop - similar timing as before. Then before I could get the meter in position it started up properly, and presented healthy voltages where expected.

I'm going to let it cool off a bit (disconnected and discharged) and try again.

I would also check the underside of the board for any dry joint solder connections.

The capacitors "look" OK in the image you posted (no bulging at the end or leakage) but this doesn't mean that they are OK.

Please verify the make and model number of the PSU? Searching online for a Corsair CS2500M gives no results. Did you mean a CS550M or CS650M or CS750M by any chance?

@jayeff - I'm not sure what was going through my head when I typed the title - the model number is the CS450M .

Can't find it any more but have read online that it "may" be possible to get a service manual for the PSU by contacting Corsair.

Here's a link. Click on the yellow Contact Us link at the top or at the very bottom of the page.

Never hurts to ask and you will definitely be in front if they can send you one.

Also how old is the PSU? Have also read that there is a 3 year manufacturer's warranty on it.

Useful to know - thanks @jayeff will drop them a line- PSU was bought in 2015 so warranty is only just expired (box says 5yrs) irritatingly.