MacBook Pro Mid-2012 starts but does not respond anymore

My gf has a severe issue with her MBP Mid-2012 (serial number is C1MK9X6ZDTY3). A few months ago I replaced the internal HD with an SSD. Everything worked fine. A new SATA cable (https://www.amazon.de/ireplacement-A1278... ) was also put in place.

Recently however the laptop had some issues. First, when pressing a certain area on the case, it would reboot. However, after rebooting I could work with it again as if nothing has happend. A few days later, it would again shut down, but then make 3 beeps while attempting to reboot. As several sources online state, this means faulty RAM. Intuitively I just tried to reboot again and the MBP worked just fine. My gf told me that there were cases where the diplays showed some glitches. Right now the situation got worse and the laptop cannot be used anymore. It boots, but then the "spinning coloured ball" occurrs. The laptop responds extremely slow. Finder cannot be opened, etc.

One more thing: She just told me that a few weeks ago she switched on the laptop with the power cable connected because the battery was empty. She then noticed some sort of "short circuit" when connected the cable. There was a tiny flash and it was as if something "burned". The funny thing is just that I would expect that the laptop immediately stops working. However it worked fine afterwards, but (obviously) slowly deteriorated as described above.

Other things I have tried:

- I run Apple diagnostics. It said there could be an issue with the battery. I then did it again with power cable attached and it said there are no problems.

- I removed both memory sticks (one by one) to ensure that none of them are faulty. With only one of them in use, the system behaved in the same erroneous way.

So what whould I do now? Can I do anything at all or should I go to a technician? Which faulty hardware could be responsible for the described behavior?

There's definitely a slew of issues going on here. First, I would take the SSD out and run a malware scan on it from another computer. I think Malwarebytes can scan external drives (maybe?). In regards to the RAM, with the BIOS beeps, slow speed, and Finder issues, I would just go ahead and get new RAM even if it technically boots up with those sticks. Get Crucial or Corsair RAM for Mac, I have good luck with those on the MacBooks. With the power issue, either the battery is shot, or the Magsafe DC-in board is. Either part is replaceable, with the latter being far more difficult, as you can see by the guide below.

If you’re handy and comfortable and decide to go with the Magsafe DC-in board replacement, you might as well replace the thermal paste on the CPU at the same time. This will improve thermals and speed.

In regards to the random pressing on the case and causing a restart, I’m not sure what’s causing that… You’re probably going to have to do some further investigating to see what components might be being pressed from the outside of the case and see.

If this helps, let me know!

Dear Alex, thanks for the reply. Sorry for the delay, but took some time to get some stuff sorted out.

Regarding your suggestions: I am pretty sure that the RAM is not damaged, because it was already replaced around 3 years ago. So the RAM was already upgraded to Corsair RAM. I think it's quite certain that they are fine.

Moreover, the SSD was also upgraded and is around 3 years old. So this should also be fine. Regarding malware scanning the SSD: I only have a Windows laptop available, but just realized, that I can't scan the Mac SSD when I connect it to the Windows laptop. Do you have a suggestion on how I can scan the SSD for malware from my Windows laptop?

I can also eliminate the SATA cable for being the issue, because the MacBook behaves the same way when booted with the SSD connected externally via USB.

Can the battery be the issue? I cannot remove it, because I don't have the special screwdrivers to do that. But maybe it needs to be replaced?

One more thing: I just connected the SSD to another Macbook and it behaves the same weird way. So the issue is definitely the SSD. I am just wondering, if it could be that the mentioned short circuit damaged the SSD? But why was it possible to still work normally with the laptops for a few weeks after the short circuit happened?

Can you recommend any tools/software to check the health of the SSD? This is the next step I want to do.

so i just connected the SSD to another mac. disk utility recognizes two drives for the ssd (maybe one is some sort of (hidden?) partition). this is what disk utility says: https://imgur.com/a/ljvuHHt

this is what the log says when trying to do "first aid" on the disk: https://imgur.com/a/FgXVoDu

there are some errors. i just googled them. they could be related to an update? the mac was recently updated to catalina, if that helps.

this is what DriveDx says: https://imgur.com/a/BhBA6aa

can you help any further with this info?

@beta2k, I don't think there is anything physically wrong with the drive based on your OG post and DriveDx. I think it has something to do with Malware. If you have another Mac available, boot to that SSD and download MalwareBytes. Run a scan and see what it comes up with. If it comes up with nothing, either MalwareBytes did not detect the real issue, or there is physical damage. I'm not 100% sure what First Aid is saying, but any specific errors ou find will be helpful.

you are right, it's nothing physically. I could find out the reason, why the MBP stops responding: the process called "pkd" is the reason. when I kill this process, everything works fine. this process blocks everything and I don't know why. you can see some info here: https://apple.stackexchange.com/question...

You got the wrong hard drive cable, You need the one for the 2012. Note the wider data path, it also needs to be protected as it gets damaged as it comes over the last step (see photo). 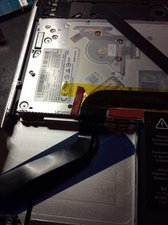 Sorry, I linked to the wrong one. Actually I bought this, and I think this is the correct one, isn't it?

@beta2k yes that is the correct cable. FYI for other readers of this, you can save a little $ buy just buying the cable without the bracket (it can be transferred ) The tape I use to protect the cable from coming in contact with the bottom case is 3M extreme mounting tape. That is just standard electrical tape use underweight the cable. Some cases have a rougher surface than others and that can damage the cable especially on standard hard drives that may vibrate.