Replaced battery percentage dropping from 70% down to 7%

Since I didn’t have time to replace the battery immediately whet it arrived I replaced it this week end (25th of January).

The whole procedure with replacing the battery went fine I have also fully charged it and leave it on charger for 2+ more hours. When I started the discharge phase it all looked okay until the state of charge dropped instantly from somewhere between 80 - 70% (charge remaining at that point was about 5600 mAh) down to 7% (500mAh). After approximately 10 - 15 minutes system reported low battery and the capacity was somewhere between 300 - 500 mAh.

After that I discharged the battery completely (I wait for MacBook to shut off) and leave it at that stage for the whole night. In the morning I have plugged in the charger and leave it turned off and charging until the light changed from orange to green than I turned it on and left it on charger for another 2 hours. After that I made another discharge cycle but the same phenomena of dropping SOC from 70% to 7 % occurred again.  (showed on pictures bellow - pay attention on the date and time)

After that I tried to reset the SMC but it didn’t help.

I also tried to unplug the battery hold power button for 30 seconds and connect it back, resetting SMC and did the whole “calibration cycle” again and it also didn’t help. 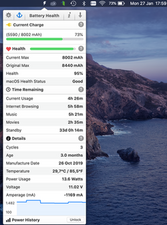 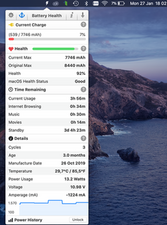 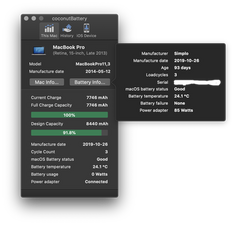 Any help would be much appreciated.

Additional picture just after SOC dropped and charge was connected:

While I do like the app Battery Health As it tells you the run time when you are on the road. It doesn't offer what the charger is doing when you are plugged in.

We really need to see CoconutBattery as that show at the bottom what the charger is doing. You only need the free version!

the last picture is made with coconut battery but it was made when the battery was full. At which state (discharge or charge) should I make the snap shoot?

Sounds like to me you got a defective battery. Have you as well tried resetting the machine? I would let the company you ordered the replacement through and get a new replacement.

I have reseted the machine several times. I've also reset SMC - didn't help. I have just today send an email to iFixit support - awaiting their answer. I'll get back with what they answer will be :)

I've contacted the iFixit support they've send a new battery right away - I changed it and it works now.

If you take some time to go through other posts on the forum, you’ll see others with the same experience and even the same exact figures you mentioned. It seems the same 70->7% is persistent and clearly points to a faulty battery, just ask for replacement.

I was looking through the forum but unfortunately didn't come across any similar posts if you could link one that would be really helpful. Thanks!

Why is my new replacement battery always dropping from ~80% to ~25%?