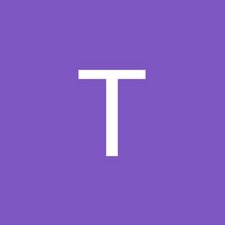 How I fixed my iPhone 6 Backlight issue after new screen installed.

I`ve asked 3 or 4 questions pertaining to no backlight after installing a new display. I also saw where someone stated new (cheap) displays were burning out the backlight function, For at least some I think I discovered why…

I installed a new display in this iPhone 6 several months ago, I thought I damaged the display by flexing it and it only worked if kept perfectly straight and halfway outside the case. I received it back from my relative and it was dead and no charge. I replaced the battery and the display (new one manufactured same as earlier one) but on testing there was no backlight. I could tell the LCD was working by shining a flashlight on the screen at an angle. I found a blown filter (due to screen!?!) and meant to replace it but I ruined the solder pads on the board. I then ran a wire from under the CPU shield (off the backlight caps) and terminated at a test pad in the upper right of the board that went to the backlight pin on the FPC connector. No backlight filter but enough to test with. The backlight issue persisted even with the display disconnected, I`m not sure why. But every time I turned on the phone if the display was connected the CPU area and the upper area of the board got real warm. Why up there, that is where the front camera & speaker stuff is. I tried disconnecting the camera/speaker cable and the backlight came back… no going away! Careful examination showed where the bracket over the speaker & camera scraped the insulation from the connecting cable and shorted it, killing the backlight. Amazing! See picture: 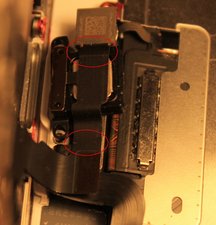 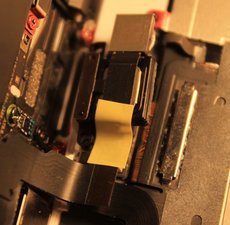 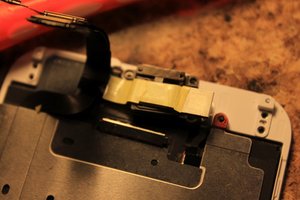 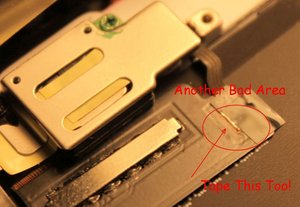 Every thing was going well! The backlight stayed on after reconnecting the camera & speaker and I though I was done. But every time I was about to push the home-button end of the display into the case the display would die! Unbelievable! Well, as shown in the last picture there was at least one more area of scraped cable to fix. Also not shown is tape where the home button cable comes out from the LCD shield near the home button. More tape was added, and now the phone is working perfectly again.!!!

The Bottom Line: When using a cheap replacement display from China be sure to check the cables for insulation issues as I discovered. In fact, just insulate before an issue occurs because it probably will. Good Luck! I hope this helps someone !

Glad to see you finally got it! Part quality really is everything when it comes to these repairs...

That’s a good catch and reinforces how buying better quality parts is the way to go. Screens with pre-populated FCAM/Sensor flexes tend to use really low quality FCAM flexes, not to mention the get jostled quite a bit in transportation. The second area you highlight are where the backlight layer gets soldered to the rest of the screen. There is supposed to be a small square piece of tape to cover it but on some screens, even good ones, they shift around a bit or are completely gone. You always have to check those before installing.