iMac suddenly decided to not power on a few months back, recently decided to bring it back to life. Replaced PSU and logic board. Device powers on with chime and all four LEDs, but no display. Due to the numerous hours spent on troubleshooting, I have become frustrated and probably overlooking something simple.

Performed some quick diagnostic and notice that none of the LED on the logic board would light up when plugged in and turned on. Check DC voltage on PSU and concluded that the iMac needed a new PSU.

Replaced PSU and iMac still would not power on. However, LED #1 would now light up when device was plugged into a power source. Ordered a logic board from iFixIt and performed a logic board swap. First attempt to power device on after re-assembly was unsuccessful. Took device apart again and double checked all wiring with intermittent power on checks during the process to make sure I was getting fan spin, LEDs on the logic board and/or chimes before adding the LCD screen.

Finally reinstalled the LCD screen, device powers on with chimes, all 4 diagnostic LEDs and fan spin. But no LCD or external monitor output. Reset SMC and NVRAM, still no display outputs. Re-seated RAM and replaced CR2032 battery, no display output. Also booted the device without RAM to verify that the logic board would generate the “No Ram” error (CMOS beeps).

I understand that my replacement PSU or logic board could be bad and I might need to RMA the parts. Just thought I would reach out to the iFixit community to see if there was something I overlooked or a quick test that would identity the bad/defective part.

Tired of working on the iMac today. Will take another look tomorrow with fresh eyes and the logic board schematics. Will post additional information (if available). 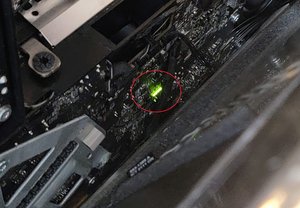 Did you swap over your CPU by chance? Your system is reacting as if the CPU is bad or not the correct one for your system.

If the logic board came with a CPU then I would return it as its bad.

Logic board (used) was provided by iFixit and did not include the CPU and graphics card. Those parts were transferred from the old board.

But since you mentioned it, I think I will test the CPU on another board to make sure it is good.

Will provide an update tomorrow. Thanks.

Disassembled the iMac and removed the i5-2400s CPU. Tested the CPU on another device. The other computer completed Power On Self Test (POST) and passed quick hardware diagnostics.

Unless someone else has a suggestion, guessing I received a bad logic board from iFixit and will need to start the RMA process.

Thats likely the case then.