Water damage - is this a lost cause?

My sister spilled a little water on her mid-2009 A1278 13” MacBook Pro. I was able to get the files she needed off of the HDD with an Orico SATA USB hard drive enclosure. Afterwards, I took it apart (following your directions for removing the logic board - thank you!), cleaned up the water damage, and tried to power it back on, but got nothing on the screen. I did get the classic Apple “dong” along with hard drive activity and keyboard backlights. The water damage was concentrated on/near the LVDS display connector on the logic board, so I was initially just going to replace that. Looking at the attached picture, do you think it’s worth replacing the cable, or is there too much damage to the logic board connector? I can replace the cable, but any further repair (ie, replacing the connector/pins on the logic board) is above my skill set. 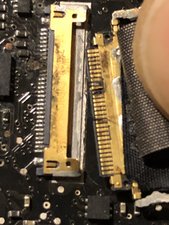 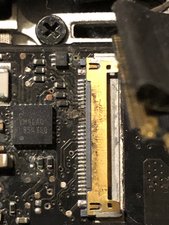 Damage looks quite spread, it is very likely the damage involves Lvds and backlight circuitry besides connector. I wouldn’t feel like recommending any of my customers to give me a 10 years old board with such damage for repair. You can now find used 2010 core2duo logic boards at very reasonable prices. They fit the 2009 topcase but be aware you run the risk of having a good board with a possibly damaged lvds connecting cable and screen.