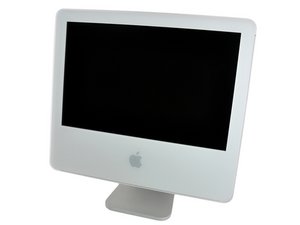 Completely black screen and no sound?

So I have been fighting with this Mac for about 2 weeks now. The symptoms are a completely black screen, as in no video whatsoever (fairly sure it isn't an inverter problem at this point)and also there is no chime sound to indicate the system coming up.

I thought the problem was originally bad caps (3 total replaced), same problem. I opened the power supply and determined there were also bad caps on it, so the power supply was replaced with no help to the problem either. I read that the heatgun reflow trick works for the black screen, tried that and it hasn't helped either! The power button on the Mac lights up but still nothing for sound and display!

The strangest thing about this is that I can hear HDD activity and the first 3 LED's are lit once the machine is powered.

What else can I try to do to fix this problem short of replacing the board? Just for a heads up, I do not have access to an adapter to test against another monitor. I am totally out of ideas at this point.

Get an adapter, it's cheap compared to a logic board replacement or repair.

If I were to get an adapter and the external display worked what would you suggest?

If the external monitor works, shine a flashlight at an angle to the screen and see if you can see the desktop. If so, replace the inverter. If not first check all the video cables and connections using a multimeter for continuity and also power. The next thing is the LCD but they seldom go out without warnings.

Thank you for the suggestions, I would like to give you an update. I wasn't able to see the screen when shining a flashlight onto the screen. At this point I am thinking that the inverter has gone bad?

If you CAN see the screen, usually it the inverter. Since you can't, it's something else. If you hook up an external monitor, it will narrow down the problem to the LCD.

Would like to add another update. I was a bit hasty in my original diagnosis. After giving the machine enough time to boot up I was able to see faint display with a flashlight. I will swap the inverter to see if that works. Thanks mayer.

Glad you waited, as the inverter is much cheaper than an LCD ;-)

you can restart the phone , if it still not fixed, check the battery, or the problem may lies in the LCD or the ribbon, you can consider replacing the LCD and the screen flex cable ribbon.