I've been using my iMac since 2011. However, I was recently on my Mac when it suddenly shut down. It automatically restarted and showed the following screen (note the vertical yellow lines) 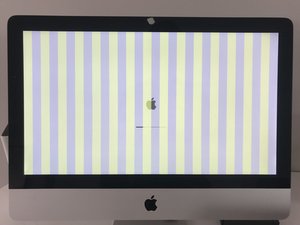 The boot process seemed to continue but I was then left with a blank white screen as seen below: 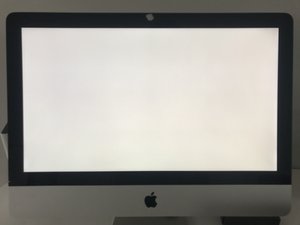 This screen lasted for about 2 minutes then the computer restarted and the process has been repeating ever since, never progressing.

I have both looked online and have contacted Apple Support directly. I have tried a number of things as listed below:

However, one of the big problems is that I only have access to the bluetooth mouse (and a separate USB mouse) that was supplied with the iMac so have only been able to confirm that the procedures above marked with an [§] have worked whereas the other may not have worked as the bluetooth keyboard may not have been connected at the time. I do have a USB keyboard on the way but have looked to this forum as I admire the values that iFixit upholds and would really appreciate some advice on what to do if this is not a software related problem.

Many forums debating the same problem have pointed to a failed GPU as the cause of this problem. However, I am hesitant to jump to this conclusion as this was in no way a gradual process, it happened instantly. Despite this, I am no expert on hardware as I focus more on software and would love it if someone could point me in the right direction of what to do if the GPU is the problem. I have seen this iFixit article here which explains the process of replacing a graphics card for my model of Mac. The technical speficiations for my Mac are the base options listed on Apple's website here.

My question is; if I do have to replace the graphics card, would it work if I bought a second hand one such as the one listed on eBay here and then follow a guide such as the iFixit one above to replace it? If so would I have to take other factors into consideration such as whether or not the previous GPU was from a Mac or a PC? And finally, would a GPU replacement almost be guaranteed to fix my problem?

I understand this is a lot to ask but I am really worried as a lot of my work is stored on the iMac and I also do not want to lose something I spent a rather lot of money on.

Thank you in advance for any help or guidance,

You will need to use a USB wired keyboard for the keyboard commands to work here. Bluetooth keyboards and mouses won’t work in this series during the boot.

The Yellow/Grey bands are likely a residual effect of a bad GPU board. The board goes into a test phase during boot and needs to pass otherwise the system will often restart hoping the issue is cleared the next time.

As for what board to get you'll need one which has the Apple firmware on it. While its possible to burn the firmware onto the EEROM manually through a burner you need to have the firmware upfront for the board you are using. You can't install the board and how to burn it that way using the updater that won't work. Bottomline here its just best to get the real McCoy then trying to mess with something else.

You'll need to clean and re-apply the thermal paste and pads (VRAM chips) when to remount your systems heat sink.

Since you need to go so deep into the system and worried about your data you can pop the drive out and mount it into an external case or use the Universal Drive Adapter IFIXIT sells to gain access to your files and if it’s getting full after you get the GPU board replace you can either add in a second drive (SSD) to help improve your systems speed and/or replace your drive with a bigger one if space is getting tight.

Thank you for your response! I'll have another go at the keyboard combinations when the USB keyboard finally arrives.

It's a shame that the GPU has gone bad, I've heard so many similar experiences with other Macs from that era. If I were able to boot into single user mode for example, is there anything you could recommend doing such as bypassing the GPU all together if I am not concerned about graphic performance. Also, if I could clean reinstall macOS, may that fix the problem?

Thank you for the information about the EEROM, I think the better option is as you mentioned. However, I may not be too keen on shelling out $100+ for a GPU where a refurbished iMac is not too far off.

Looking back, I may have a backup from not too long ago so data loss it not too much of a concern now.

Once again, thank you so much for your help!

Hi. How did you solve the issue? I have the very same one. Thanks!

Time to replace the GPU board