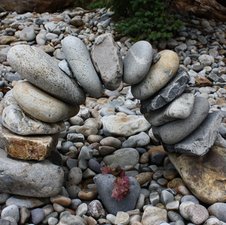 A friend asked me to replace the broken screen on her iPhone 6. As I'd done similar repairs on her daughter's phones (and various other friends and neighbor's iPhones) I agreed. My friend ordered a replacement screen and brought it to me along with her damage iPhone.

Upon opening the iPhone case, I noticed what I presume are signs of moisture damage. (See annotated photo.) I pointed these areas out to my friend who explaned that she had no knowledge of any water damage incidents. The screen had cracked only a few days prior and had been stored in a zip-lock plastic bag between the time the screen was cracked and it was brought to me).

I started to proceed with the repair (wondering how concerned I should be about the presumed moisture damage. Then I ran into a problem removing one of the screws on the front panel assembly. In the process of figuring out solutions, I talked with my friend who revealed that too often, the screen goes black. Often this occurs while in the processing composing a text/(i)message. When she turned the phone back on the message would be gone and she'd have to start over. She also reported that "calling or answering has been a problem".

What do you all think about my plan:

1. Advise my friend to return the screen assembly she'd initially ordered (which doesn't have the front panel assembly); I'll instead install an ifixit LED screen and front digitizer assembly part that will have no front panel parts where there's visible moisture damage.

2. Use a cotton swab and alcohol to carefully clean the area over the rear-facing camera.

Meanwhile, How does one assess if the battery should be replaced, too? Should I try to take the whole thing apart to inspect/clean? (How do you weigh the risk/benefit?)

Thanks in advance for sharing your response(s)! 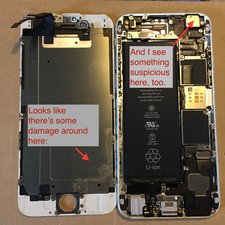 Ok. That liquid damage is from a spill. Like a beverage. You really don't need the whole assembly. The plate and the camera flex assembly, if the new display and camera flex are intact and working. The other problem I will go over shortly, doesn't probably effect what's going on. You do need to clean that phone. What it really wants is an ultrasonic bath, where the shields are removed and using the process of cavitation it cleans all the corrosion growing in that board. It's a three year old phone. The battery is probably shot. I don't care when she bought it. The dying part is probably because of the battery. Phone can't work no power? Right? If you replace the battery and still doing it, then it's cause the phone doesn't have free space, and needs to be cleared up. So get a display from iFixit, you don't need the plate, you can clean and swap that, get a new battery from iFixit. You can get away with cleaning it lightly. But it wants an ultrasonic bath

Replacing the screen and digitizer is a solid idea; the part you specified also comes with the small forward facing components (camera, mic, speaker etc) . I repaired a phone that was dunked and the screen stopped working after the replacement the screen worked but siri didn't work and talking on the phone was intermittent because the front mic and speaker were damaged and did not get replaced. As far as the battery goes the water damage looks like it's on the opposite side from the battery connector so it probably did not reach the power circuitry. You could test it in another phone or with a meter. Your picture shows some clear residue from whatever was spilled on the phone... I think you should be able to determine how much of the phone is affected and if it needs cleaning. Personally if she has been using it in this state whatever is going to be damaged has been already and since it still works (mostly) nothing on the main logic boards has been compromised. If the phone is shutting off randomly find out if that was only on battery or if the power/charging circuit might be affected.

In short you have to use your best judgement based on the info you have. Check for off colored components/cables for shorts or burned out parts carefully take note of where the liquid residue shows up and near what open or sensitive parts or connections might be affected. When you clean the phone watch for corrosion under the residue... etc. But I think you have a solid plan :)